Why else would he have had a pillow over his head?

The conservative Internet is thundering with suspicion that Supreme Court Justice Antonin Scalia, who died on Saturday morning in Texas at age 79, may have been murdered by his liberal political opponents.

Less than two days after the death of Scalia, the front pages of the Internet’s most popular conservative news sites are asking if the American conservative icon was a victim of foul play.

The theory rests on two points. First, Scalia was found in the morning dead in bed with “a pillow over his head. His bed clothes were unwrinkled,” reported the San Antonio Express-News. That’s according to Houston businessman John Poindexter, who owns the 30,000-acre luxury getaway Cibolo Creek Ranch, and found Scalia’s body late Saturday morning.

Many people sleep with pillows on their head, but the position has nevertheless provoked suspicions.

Second, Presidio County Judge Cinderella Guevara (a Democrat) said there was “no foul play” and pronounced Scalia dead of natural causes without seeing the body and without ordering an autopsy.

It reportedly took several hours from the discovery of Scalia’s body for authorities to find Judge Guevara. Another judge, Juanita Bishop, said she would have ordered the autopsy.

From there, the ‘pillow murder’ theory went straight line to the headlines on the biggest conservative sites on the Web. Drudge Report, Breitbart, The Blaze, and World Net Daily reach millions of dedicated, mostly right-wing American readers, many of whom took news of Scalia’s death as a threat to their political hopes for the United States.

It was the decision of the Drudge Report—still immensely influential two decades after its initial rise—to run a headline about the “pillow over head” that first catapulted the issue toward the forefront. Other publications soon followed. 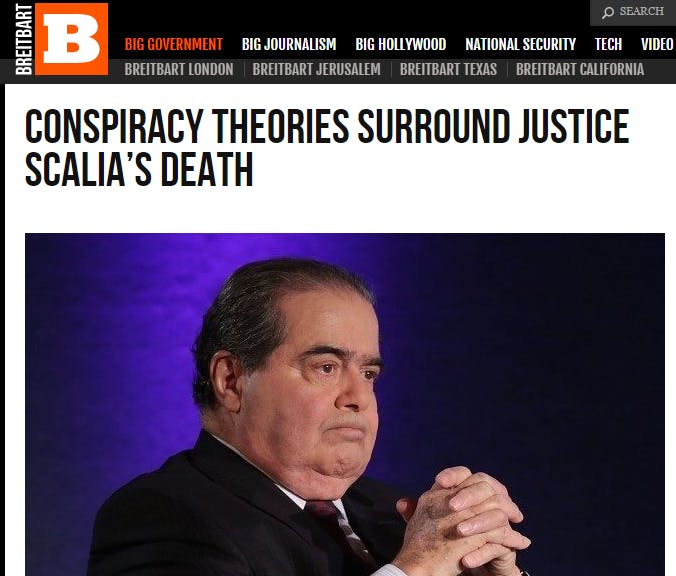 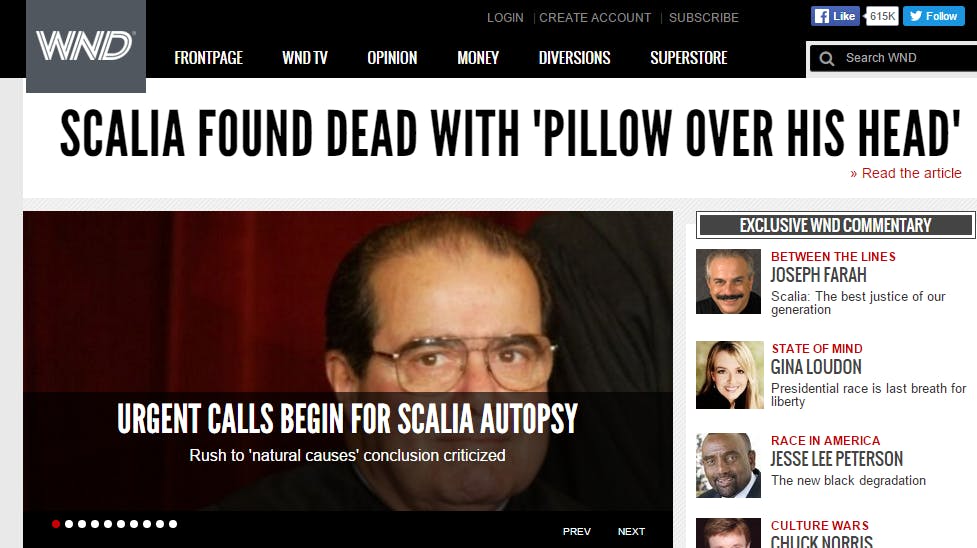 Feel free to take a moment to read that Chuck Norris column if you need to.

On Facebook, some early conversation is being dominated by those who claim to have immediately known the justice was murdered by political opponents. 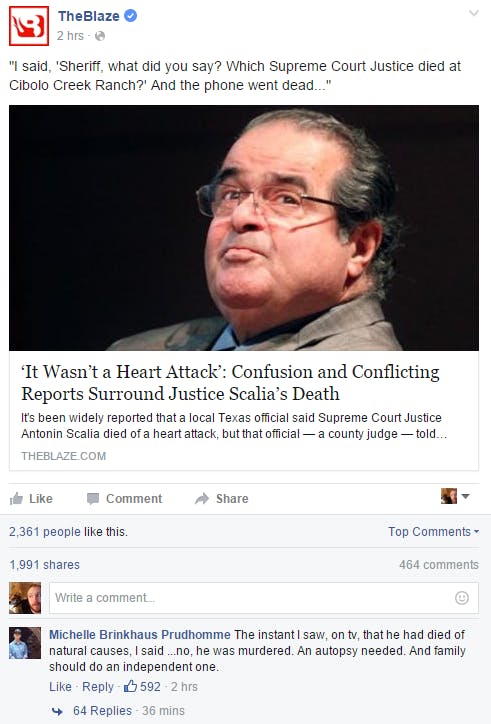 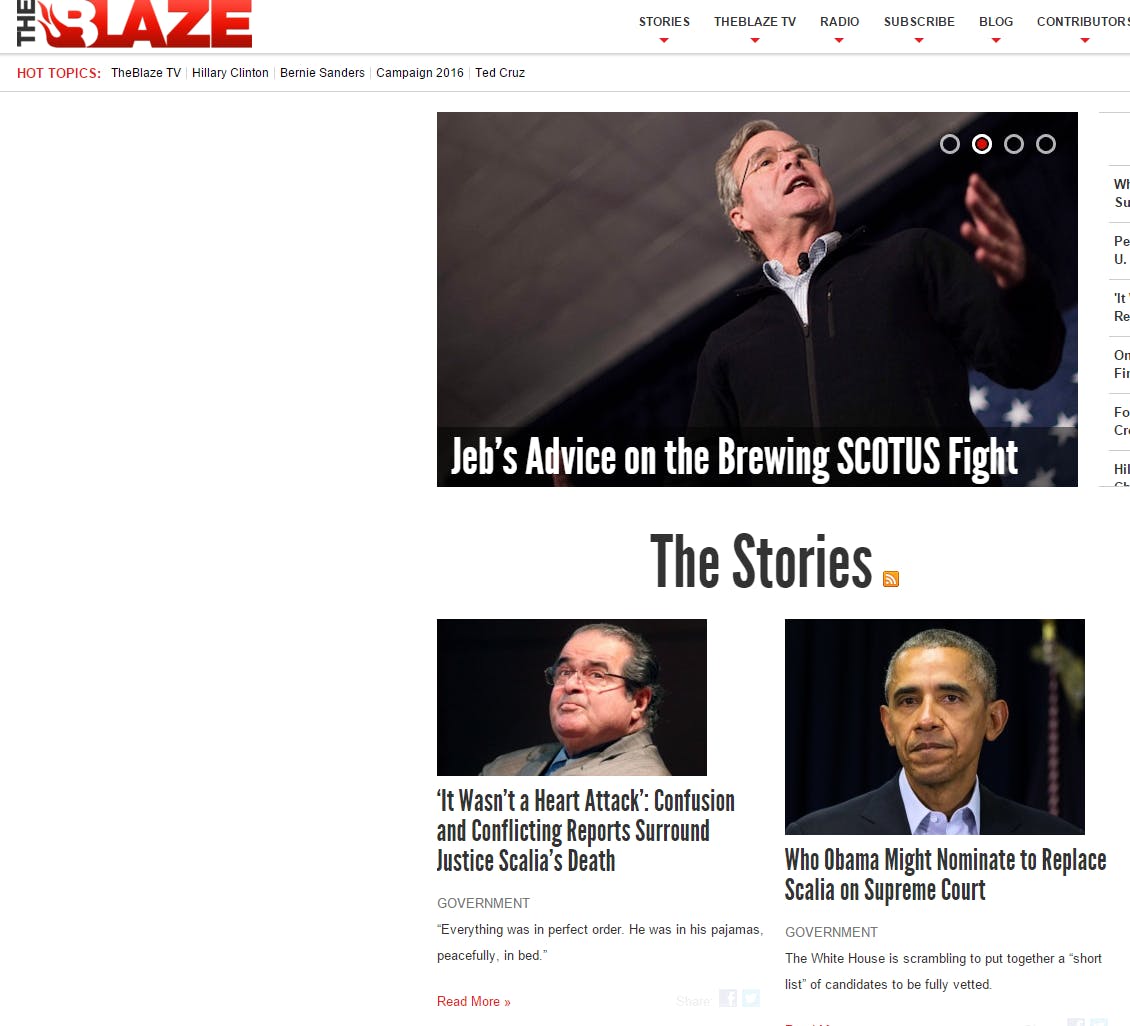 Even stories that raised doubts as well—a Breitbart article noted that “those theories cannot explain why, if the president had wanted Scalia (or another conservative jurist) dead, he would have waited past so many big decisions”—were countered by readers and Facebook commenters who saw sinister acts behind the justice’s death. 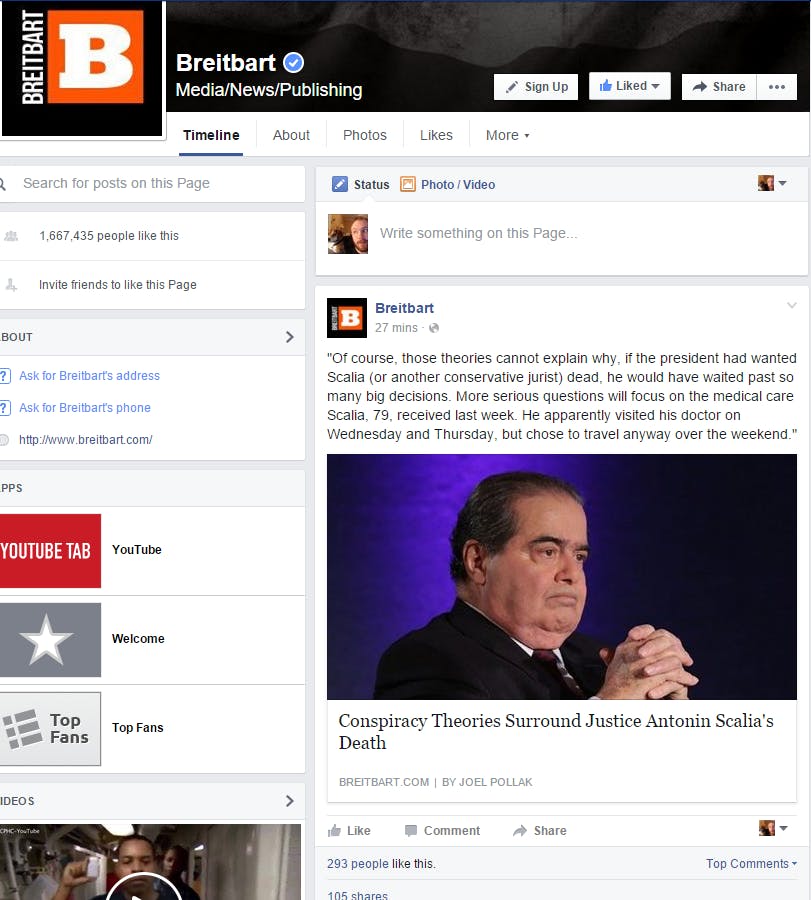 Notably absent from the fervor of murder theories is Fox News, whose website emphases the “natural causes” from which Scalia died, according to Judge Guevara, based on conversations with local and federal investigators, “as well as Scalia’s family and personal physician, before determining that an autopsy was not necessary,” the Fox News report reads.

The theories are likely to help energize already passionate conservatives in their opposition to Obama’s nomination of a new Supreme Court Justice.

Whether the various theories cross into more mainstream territory remains to be seen. Fox News’ cable television shows may be a bellwether here for noting the murmur’s momentum. More moderate and liberal sites have so far not spotlighted the pillow and autopsy questions in damningly large headlines—but then, it’s only been 48 hours since Scalia’s passing, so the life of the murder theories are still up for grabs.

But with or without television talking heads, it’s crucial to understand the reach and power that sites like Breitbart have. With around 20 million visitors per month to Breitbart alone, these publications increasingly drive the national conservative conversation, a phenomenon exemplified by Breitbart and Drudge Report’s early and enthusiastic embrace of Republican frontrunner Donald Trump‘s presidential run.

While the mainstream success of these murder theories remain to be seen, the conversation on the fringes is already boiling up.

On 4chan, home to a hotbed of far-right users, Scalia’s cause of death is being argued by a poster convinced that Obama murdered the Justice.

On Alex Jones’ website Infowars, commenters warn that President Obama will wrongfully “sweep the dirt under the carpet,” while Jones himself argues that “this is the season of treason.”

“We would be fools not to ask the question was this stalwart defender of the Constitution compared to the Democrats … flaming tyrants … we know their is a foreign, off-shore coup over this country,” Jones said in an “emergency transmission” to his readers.

On several of the Web’s self-described conspiracy theory forums, a clearcut consensus has yet to emerge. Not everyone is so convinced that murder might be the cause of death—but the theory is still percolating.

“They thought they could hide the truth, and then they stupidly went and told us he isn’t getting an autopsy,” one Reddit user wrote on the /r/conspiracy community. “Well we know better. Obese 79-year-olds don’t just die.”