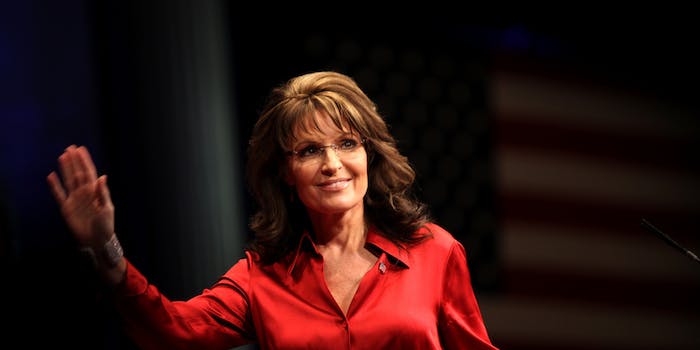 The conservative Internet’s defense of child-molester Josh Duggar and his family took an unexpected turn today, as Sarah Palin and her daughter Bristol stridently denounced…Lena Dunham.

The younger Palin wrote on Patheos that the liberal news media was hypocritical for attacking the Duggar family, the stars of the popular TLC show 19 Kids and Counting. The show has been canceled in the wake of revelations that star Josh Duggar spent years sexually abusing at least five girls—including four younger siblings—as a teen.

“I can’t believe how crazy the media is going over the Duggar family compared to the big fat yawn they gave Lena Dunham when she wrote in her book that she sexually experimented with her sister,” Bristol Palin wrote.

Her mother, the former governor of Alaska, was even more incensed. “HEY LENA,” she screamed at the top of a Facebook post, “WHY NOT LAUGH OFF EVERYONE’S SEXUAL “EXPERIMENTS” AS YOU HAUGHTILY ENJOY REWARDS FOR YOUR OWN PERVERSION? YOU PEDOPHILE, YOU.”

Josh Duggar’s parents allegedly spent years covering up his assault of his siblings and cousins, according to a damning police report obtained by In Touch Weekly in May. Duggar confessed to the allegations in People, and his parents also released a statement acknowledging that Duggar had “made some very bad mistakes.” A second police report released on Wednesday added to that charges against Duggar with shocking new details.

To Bristol and Sarah Palin, however, this new information about the severity of Duggar’s behavior and his parents’ denial was merely an excuse to revisit the controversy over Dunham’s autobiography, Not That Kind of Girl, in which she wrote about sexually experimenting on her 1-year-old sister when she was 7.

Dunham’s autobiography caused a firestorm among conservatives last fall when a right-wing website, Truth Revolt, published the relevant passages. Dunham issued an apology in Time, noting that her now adult sister, Grace Dunham, had approved everything she had written. At the time, numerous psychologists described Dunham’s behavior as a seven-year-old as perfectly normal.

I’m not defending the Duggar boy’s obvious wrongdoing over a decade ago. The main victim in any story like this isn’t the perpetrator, it’s the innocent ones so harmfully affected. I’m not an apologist for any sexual predator, but I’m sickened that the media gives their chosen ones a pass for any behavior as long as they share their leftwing politics. Case in point, they suggest Lena Dunham’s sexual assault on her sibling is cute, and she’s rewarded for it with fame and fortune. Meanwhile, they crucify another, along with an entire family.

It should be noted that although Palin’s ire is misplaced, her point about the media giving its chosen ones a pass is a good one. Rumors and even now-confirmed details about Duggar’s sexual abuse have circulated online ever since 2007, all while TLC and its sister network Discovery Health were airing specials featuring the Duggar family. It’s unlikely that the media companies had no knowledge of the allegations, which reached Oprah Winfrey in 2006, prompting her production company to inform police and cancel the family’s appearance on her show.

Palin went on to compare Dunham to Roman Polanski and Woody Allen and to suggest that the media should focus on figuring out who leaked the police reports to In Touch at the expense of Duggar’s underage victims.

People reports that Dunham has declined to respond to Palin’s post.