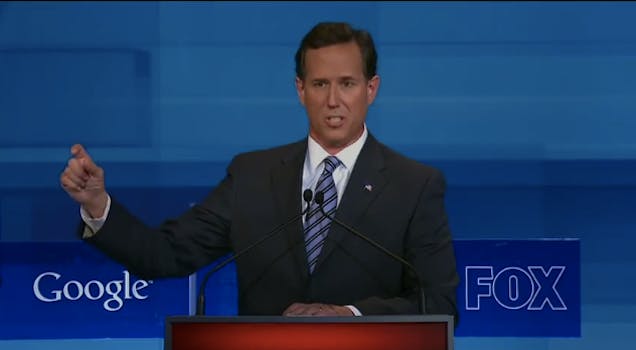 Rick Santorum told a gay soldier during the GOP debate that he would institute "don't ask, don't tell." People went online today to tell Santorum just what they thought of that response.

Santorum’s response — he said he would and added gays get “preferential treatment” — was almost as shocking to many as the audience response. The crowd loudly booed the soldier and cheered Santorum.

People took to their keyboards this morning, weighing in their disapproval of Santorum and the crowd’s response to Hill.

But Santorum was the clear winner of last night’s GOP debate, according to a NY Daily News poll being conducting on their site, though this may be an act of “trolling,” or pranking, by the Internet community to call more attention to Santorum’s controversial comments.

“It’s fun to watch each of these right wing screwballs fight over who is the most  EXTREME right winger, the one most likely to lose” wrote “Skeeball” on the NY Daily News article and poll.

On YouTube, the Fox News video of the exchange is quickly gaining viewers. It now has more than 50,0000 views and more than 2,000 comments, mostly deriding Santorum.

In true YouTube fashion, the video has also been mirrored. There were no response videos to Santorum’s remarks at time of publication, but it is only a matter of time given the magnitude of outrage.

On Reddit, people created multiple threads on Santorum’s response across different subreddits. One Reddit thread even questioned if the cheering crowd response was actually added in by Fox News.

Andrew Sullivan, writer and columnist at the Atlantic,  tweeted this morning:

“Until the Florida GOP apologizes to that soldier, along with Santorum, we should not let up in protesting this disgrace.”

Hill was incidentally, the only soldier to ask a question at the GOP debate.