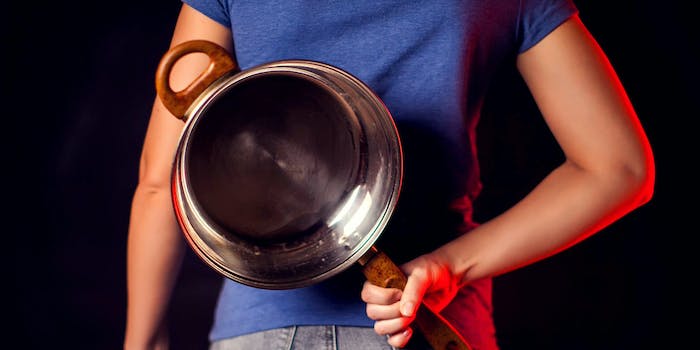 Sandy Smith promises to bring the frying pan to Congress.

A North Carolina congressional candidate is going viral for claiming she “never ran anyone over” or “hit them in the head with a frying pan.”

“I never ran over anyone with a car and I never hit anyone in the head with a frying pan,” Smith tweeted on May 11.

“If I did that don’t you think I would be in jail? All of these #FakeNews allegations have been dismissed by a judge and the people peddling these lies will PAY when I take them to court.”

Smith’s tweets are based on opposition research published by her former opponent. The research included accusations of domestic violence against her, including hitting a former spouse with a frying pan.

A story in the Carolina Journal earlier this month detailed some of the claims by two of Smith’s ex-husbands, Eric Goranson and Randy Auman.

Auman, to whom she was reportedly wed from 1995 to 2001, told the Journal that she sometimes took swings at him but that he wasn’t injured. He said she also tried to run him over with his car. They divorced shortly thereafter. The outlet reports that the split was contentious.

Goranson made similar accusations about Smith’s penchant for violence during their three-year marriage, which lasted from 2007 to 2010. Both parties were reportedly arrested for domestic violence on one occasion. The charges were dropped.

The pair split shortly thereafter. The divorce was similarly contentious, the Journal reports.

Smith’s tweets denying the accusations received relatively little attention until she won the primary on Tuesday. Now she’s being mocked for drawing attention to the very things she denies in an example of the Streisand effect.

“My ‘I Never Ran Over Anyone With a Car and I Never Hit Anyone in the Head With a Frying Pan’ T-shirt has people asking a lot of questions already answered by my shirt,” reads one of the most popular replies, a take on a similarly worded 2013 tweet about human trafficking.

Multiple people chimed in with sarcastic remarks and jokes.

“I also never accidentally blew myself up with ACME brand TNT,” wrote one.

Many people felt that Smith’s tweet was, as one put it, “oddly specific.”

In an unexpected move, Smith is making the frying pan a symbol of her campaign.

Records show that she’s posted the term “frying pan” nine times in the last few weeks on the Telegram account linked in the bio of her verified Twitter.

In addition to again denying hitting a former spouse with a frying pan, Smith’s vowed to bring the cookery with her to Congress if she wins.

“DC could use a couple of ticked off momma bears with frying pans,” she wrote in a recent post.

Smith lost her general campaign in the same district in 2020. She now faces Democrat Donald Davis.