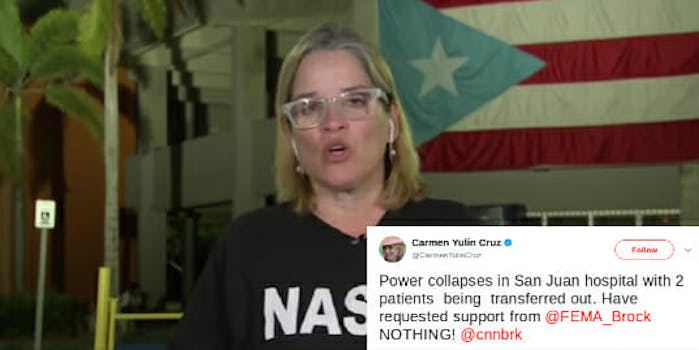 She's incensed about the disaster response.

San Juan Mayor Carmen Yulin Cruz made a desperate plea late Saturday night, tweeting that power had gone out in one of the Puerto Rican capital’s hospitals and blasting FEMA for its response. Cruz has been an increasingly vocal critic of the federal government’s response to the post-hurricane crisis in Puerto Rico, warning in recent weeks that failure to divert a huge amount of resources to the island could result in “something close to a genocide.”

Cruz sent the tweets a little before midnight on Saturday. She stated that two patients at the San Juan hospital had been transferred. Then, she tweeted again when four were taken elsewhere, all while tagging FEMA director Brock Long and accusing the agency of having failed to provide adequate support.

The Hospital had requested support from FEMA and no response. Oh sorry they are collecting data…

Begnaud reported on the situation in a short video posted to his own Twitter account Sunday morning, highlighting Long’s response.

About 4am Sunday @CarmenYulinCruz sent out 3 desperate tweets, 2 that slammed the @fema response in PR. This is how @FEMA_Brock responded: pic.twitter.com/QJIkyYiPni

Cruz has become a highly visible target for some in the Donald Trump administration in recent weeks, thanks to her urgent and forceful criticisms of the federal government’s disaster response. Trump has personally gone on the attack in response, calling Cruz “not a capable person” less than a week after his gaffe-filled, much-criticized trip to the island and tweeting that “politically motivated ingrates” aren’t giving the government the credit it deserves.

Long also criticized Cruz on Sunday morning, saying FEMA has “filtered out the mayor a long time ago” and calling her criticisms and pleading for additional aid “political noise.” At present, more than 90 percent of Puerto Rico is without electricity, food and drinkable water are scarce, and thousands of people whose homes were destroyed by the storm are still living in shelters.