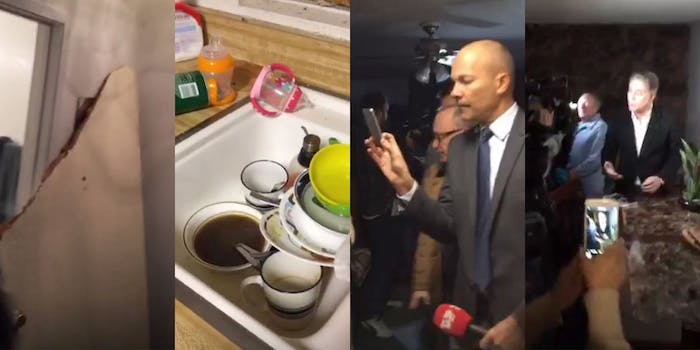 This one might actually be about ethics in journalism.

On Friday morning, the world got a firsthand look inside the apartment of the alleged perpetrators of a terrorist attack in San Bernardino, California, that left 14 people dead. Watching news organizations scramble to exploit that access, however, left many people profoundly uncomfortable.

MSNBC and CNN camera crews spent the morning rifling through the Redlands, California, apartment shared by Syed Rizwan Farook and Tashfeen Malik. Police killed the couple in a shootout on Wednesday, after they allegedly opened fire at a holiday party for the San Bernardino County Health Department held in the conference room of a center for people with developmental disabilities.

Videos from the scene showed a crowded situation inside the apartment, with reporters opening drawers, looking at children’s toys, and rifling through stacks of photos.

This is journalistic malpractice. pic.twitter.com/iYqglTbH8Y

Inside the #SanBernardino shooting suspects' home an abandoned crib. The baby is now an orphan. pic.twitter.com/y5ogslQUrV

On their live broadcasts, reporters revealed the personal information of not just the suspects but also their family members, holding up personal documents like driver’s licenses and Social Security cards.

MSNBC just showed the driver's license of Syed Farook's mother, Rafia Farook, and her SS# in a live broadcast

Eventually, members of the public joined the news media inside the apartment.

CNN journo on scene says no longer just reporters: "There's a woman with a dog walking into the house…"

Someone just brought a kid into the San Bernardino shooters' apartment? https://t.co/X6gJjNs73E pic.twitter.com/q4yxHvVqYb

MSNBC, the outlet that bore the brunt of criticism for being the first to air footage from inside the apartment, released the following statement about its actions:

“MSNBC and other news organizations were invited into the home by the landlord after law enforcement officials had finished examining the site and returned control to the landlord. Although MSNBC was not the first crew to enter the home, we did have the first live shots from inside. We regret that we briefly showed images of photographs and identification cards that should not have been aired without review.”

The FBI told the Washington Post that the location had been cleared as a crime scene on Thursday. The bureau did not tell the Post whether it was allowing the media to enter the apartment.

The FBI did not respond to a request for comment.

A spokesperson for the San Bernardino County Sheriff’s Department told Grasswire that the apartment was still part of an active investigation and had not been cleared.

There have been conflicting reports about exactly how the media got into the apartment in the first place. Some reporters have said that the landlord allowed them inside. But the landlord said that camera crews barged in uninvited after he opened the door.

@acecloss Yep. I unscrewed the board on the front door the FBI had put on. With the permission of the landlord, who was beside me.

After the scene quickly turned chaotic, the door to the apartment was once again boarded up, as a large crowd amassed outside. Officials reportedly then escorted the landlord away from the scene.

An absolute circus here at shooting suspects' apartment. Door being boarded back up by landlord. pic.twitter.com/Bs0rNQVVXp

The reaction on social media to journalists’ intrusion into the apartment was instant and visceral.

The media just ruined an entire crime scene. There are no words.

There is literally no breaking news re: the #SanBernadino. @CNN and @MSNBC literally just created chaos and called it "breaking news."

Please disregard this as the work of a few extremist zealots, they are not representative of our group.