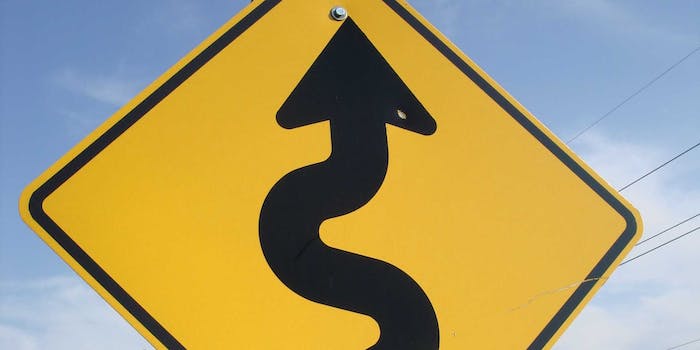 Is Samsung’s new display shape ahead of the curve or just crazy?

The company's new obsession isn't doing it any favors.

Once upon a time, curved TV sets ruled the land. In fact, if you wanted a television set you prior to 2007, chances are you were going to end up with a heavy, bulky, curved-glass CRT television. The HD revolution largely stamped out curved TVs, but now Samsung wants to bring them back. No, the electronics giant isn’t pushing for a rebirth of boxy television technology—this is simply a symptom of Samsung’s obnoxious new obsession with curves.

It’s not clear exactly where Samsung got the idea to begin applying curves to products that are better off without them, but no category has gone untouched. The company’s HU9000 series TVs are both 4K in resolution (which may or may not become as popular as the current 1080p standard) and curved for absolutely no good reason. I’ve experienced a curved display before and it’s quite fantastic, as long as you’re sitting directly in front of it. In your average living room, however, where multiple viewers are looking at it from a variety of angles, it can be far more trouble than it’s worth thanks to its concave form. If I’m in the market for a new TV, I’m going to look for one that won’t necessitate a complete redesign of my living room. The new Gear S smartwatch is practically as powerful as your smartphone and will have access to hundreds of apps… which will look great on its 2-inch curved display. The problem is that the device is so massive now that you might as well tape your phone directly to your wrist instead, because you probably won’t know the difference. Virtually every hands-on testimonial immediately mentions that the watch is simply too large for the vast majority of people to find comfortable, and that’s a big deal considering you’re supposed to be wearing it around your wrist during most waking hours.

And then there’s the Galaxy Note Edge, a massive phablet with a 5.6-inch screen that curves over the right edge of the device. This is easily the most absurd example of Samsung’s new, curvy enthusiasm yet. In fact, it’s such a peculiar looking phone that when the concept was initially shown off in 2013, nobody really thought it would eventually be offered to consumers.

Because of the curve on the right side, anyone who is left-handed is going to be immediately turned off by the Note Edge. Holding the phone in your left hand means attempting to reach across the massive screen to touch the shortcuts and alerts listed on the curved edge. That’s a left-handed deal-breaker if there ever was one.

Durability is another huge question mark thanks to the curved display. Take a look at your phone right now and count the number of dings, dents, and scratches on the edge. Any one of those accidental bumps could spell the end of your phone if it connects firmly with the glass of the Note Edge.

What’s that? You have your phone in a case? Oh, well you’ll need to rethink your accessory choices with Samsung’s new phone because you certainly won’t be putting a protective case over part of the actual display—and since that fancy curved screen runs down the edge of phone, it will always be far more vulnerable than devices with more traditional displays.

Perhaps the most important shortcoming of the Note Edge is that the curve really serves no clear purpose, aside from being a novelty. When viewing the phone straight-on, the curved portion is of little use, and unless you find yourself looking at the edge of your phone on a regular basis, the curve itself is pretty useless as well. It exists simply because it can.

The Note Edge is the ultimate curved shot in the dark for Samsung. It’s a clear indication that the company really has no clue if curved displays are going to become “a thing,” and if they are, where Samsung will fit in. It has less universal appeal and what would appear to be a significantly higher risk of damage, and the only positive thing would-be buyers get in return is some curved screen real estate and perhaps a few strange gazes from fellow customers at their local coffee shop.

Samsung’s obsession with curves is doing them no favors right now. I have no doubt that there are plenty of useful, innovative applications for curved display technology, but Samsung certainly hasn’t stumbled across any so far.