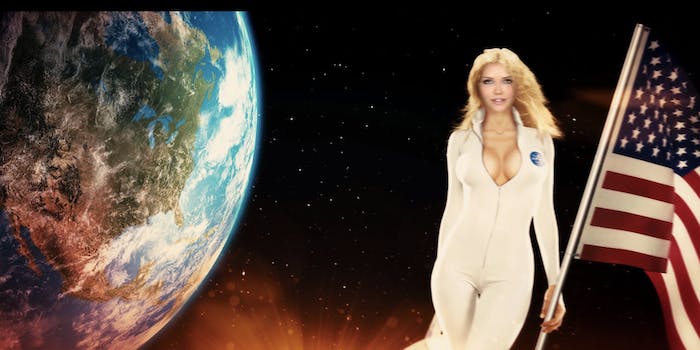 Is ultra-HD just too close for comfort?

The teaser for Naughty America 4K (SFW) opens with a sweeping aerial view of the planet, in breathtaking, crystal-clear detail. The first few bars of “Thus Spake Zarathrustra” surge over an image of a pneumatic blonde in a form-fitting space suit on Mars, American flag in hand.

But that’s OK, says Naughty America CEO Andreas Hronopoulos, because my Bush administration-era MacBook is not the appropriate platform for the company’s 4K ultra-HD videos, anyway. A press release from Naughty America 4K also warns that most computers are not equipped to handle the data.

“You really cannot experience it until you get a 4K TV,” Hronopoulos told me. “It’s like drinking a glass of wine with a cold. It just doesn’t work.”

Naughty America is one of the few adult entertainment companies to hop on the UHD bandwagon. So far, they’ve invested hundreds of thousands of dollars in the production of 4K hardcore videos, to be released later this year.

“There’s nothing more exciting than being closer to that experience without actually having to put on a device or goggles or anything,” Hronopoulos said of 4K. “We’re in the business of helping people find their fantasy, and we believe 4K helps them do that.”

“I think the rest of the industry sees it as a, ‘Oh, do we need to spend the money? Should we not spend the money?’” Hronopoulos said. “And that’s not how we think of it. We think of it as, it’s our duty to bring our customers closer to the fantasy. 3D didn’t do it, but we think 4K will.”

“The people who are gonna do it will do it, if they want to download and share that much data to their computer,” he said. “But it’s a very, very massive file to share and put on your desktop.”

Judging by some of the commentary on Naughty America’s announcement, it’s also up for debate whether consumers are interested in purchasing an ultra-high-definition TV “for the pleasure of peeping gnarly boob incision scars in gruesome resolution,” as a Gawker writer charmingly put it. Indeed, some of the reactions to the announcement on Twitter were less than enthusiastic, to say the least:

#4KPorn. Quality so amazing you can actually see the parents disappointment.

“I can tell you from seeing the 4K, the women are even more beautiful, better than they look in person,” Hronopoulos said. “You’re just getting closer to reality with the technology. It just brings you closer to them.”

It remains to be seen whether UHD will take the industry by storm, or if Naughty America’s investment will have the same result as, say, drinking wine with a cold. Although 4K TVs and 4K-compatible computers are getting cheaper, they’re still fairly pricey. A new 4K-compatible MacBook Pro sells for a wallet-punching $3,000. It’s unclear whether consumers are willing to shell out that much to stream ultra high-definition content at all, let alone for the privilege of watching a nurse and a doctor do it doggy-style on an operating table with every wrinkle, crevice, and pubic hair rendered in crisp, vibrant detail.

What is clear, however, is that Naughty America and other early 4K adopters are, like the busty blonde cosmonaut in their campaign teaser, charting unknown territory.