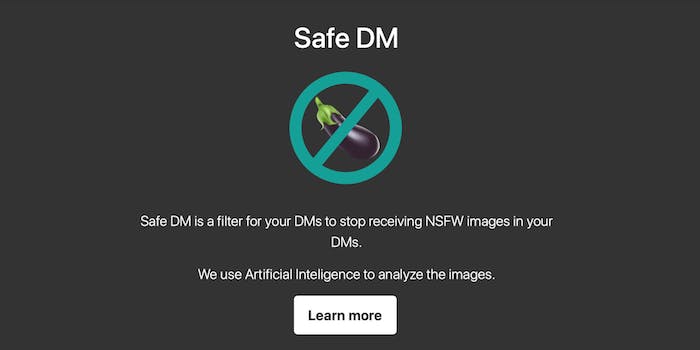 This Twitter extension can block unsolicited nudes from your inbox

On the receiving end of some unwelcome photos in your DMs?

On the receiving end of some unwelcome photos in your DMs? This extension is here to filter them out.

Safe DM, a free content-blocking extension, was released Friday. Citing data from YouGov Omnibus that shows 78% of millennial women have received an unwanted image, Safe DM decided to use content recognition to “target these types of messages and delete them immediately.”

According to a report from the BBC, Safe DM is currently only available on Twitter. Kelsey Bressler developed the tool. The intelligence behind the filter is informed by solicited crude photos, which Bressler crowdsourced via the Twitter account @showyodick.

BBC reports that over 4,000 photos were sent in, with developers claiming a 99% success rate for blocking unwanted images.

Bressler told the BBC that receiving an unsolicited nude image was the “virtual equivalent” of being flashed in real life.

“You’re not giving them a chance to consent, you are forcing the image on them, and that is never okay,” Bressler told the BBC.

Development for the extension began in September of 2019 after Bressler received an “unsolicited dick pic,” according to Slate.

Slate also reports that some states, such as Texas and California, are working to criminalize the act of “cyber flashing,” or sending someone an unwanted nude image.

Bressler told the BBC that plans are in motion to roll out Safe DM to more social media platforms, but there isn’t a solid release date as of yet.