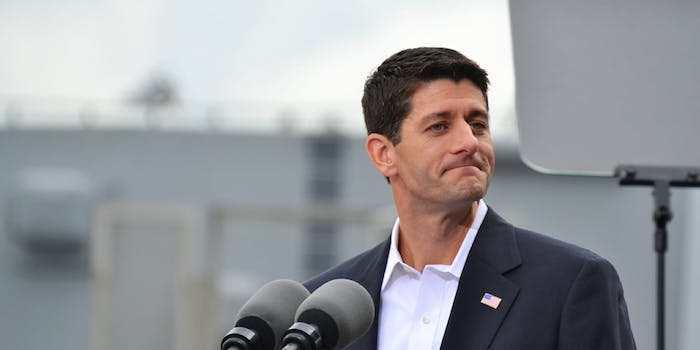 House Speaker Paul Ryan (R-Wis.) said on Thursday that citizens’ gun rights must not be taken away in the wake of Wednesday’s school shooting in Parkland, Florida, in which 17 children and adults have now been confirmed killed.

“There’s more questions than answers at this stage,” Ryan told Indiana radio station WIBC. “I don’t think that means you then roll that conversation into taking away citizens’ rights—taking away a law-abiding citizen’s rights. Obviously, this conversation typically goes there. Right now, I think we need to take a breath and collect the facts.”

Here are a few facts that have already been collected: The 19-year-old suspect, Nikolas Cruz, an expelled student of the school, was arrested at the scene by police and has been charged. The attack was reportedly carried out armed with an AR-15 rifle. The killing spree is understood to be the one of the 10 deadliest mass shooting in recent U.S. history and the eighth mass shooting of 2018, a year that is only a month and a half in.

Ryan’s statement echoed that made by Sen. Marco Rubio (R-Fla.), who also warned the public against jumping to conclusions when it came to advocating for gun law reform and asked to “reserve judgment.”

“I think it’s important to know all of that before you jump to conclusions that there was some law that we could have passed that would have prevented it. And there may be, but shouldn’t we at least know the facts?” he told on Fox News on Thursday.

Rubio, who has reportedly received over $3.3 million in political donations from the NRA over the course of his career, said that “people still don’t know how” the shooting happened.

“I think you can always have that debate,” Rubio said of calls for gun law reform. “But if you’re gonna have that debate about this particular incident, you should know the facts of that incident before you run out and prescribe some law that you claim could have prevented it.”

“I’ve seen a lot of that on TV, and maybe there is a law that could have prevented this instance. But we don’t know that and neither do they,” he continued, addressing his political opponents calling for change.

Sen. Chris Murphy (D-Conn.), responding to the shooting on Wednesday in the Senate, described the bloodshed as “a consequence of our inaction” on guns.

“This happens nowhere else other than the United States of America—this epidemic of mass slaughter, this scourge of school shooting after school shooting,” he said. “It only happens here not because of coincidence, not because of bad luck, but as a consequence of our inaction. We are responsible for a level of mass atrocity that happens in this country with zero parallel anywhere else.”

President Donald Trump, however, has steered clear of the political debate so far. Via his personal Twitter account, the president gave his “prayers and condolences to the families of the victims” and added that “no child, teacher or anyone else should ever feel unsafe in an American school.”