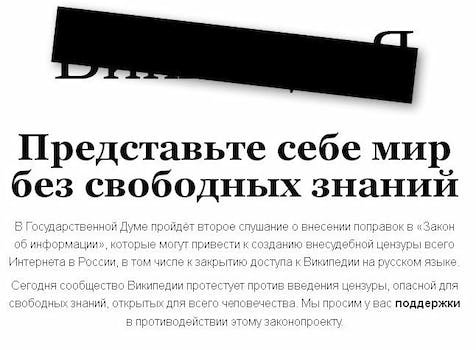 The bill, currently being considering by Russia's State Duma, would create "a unified digital blacklist."

If you tried visiting the Russian-language Wikipedia today and had no luck, don’t blame your computer or an overzealous script-blocker; Wikipedia shut down its Russian main page on Tuesday to protest the State Duma’s proposed Bill 89417-6, which the state-owned news agency RIA Novosti described as “a unified digital blacklist of all websites containing pornography, drug ads [or] promoting suicide or extremist ideas.”

But critics, including the lone commenter on RIA Novosti’s story, suspect the Russian government has a less benign motive. On June 7, when RN initially reported the proposed law, the anonymous commenter noted:

“Protecting the children” and “fighting terrorism” are the typical reasons given for introducing censorship but blocking websites is unlikely to have any significant impact on either paedophiles or terrorists. … History shows that censorship is inevitably used for political ends, so political and human rights groups, trying to expose corruption and other crimes by public officials will likely be those most affected by such a ban.

The proposed bill is merely the latest in a string of recent Russian laws apparently aimed at cracking down on critics of President Vladimir Putin. For example: Until May, Russian protesters who took part in unsanctioned protest marches could be fined up to $160 for that “offense.” Later that month, Putin signed a bill raising the fine to over to $32,000.

Critics claim the actual purpose of the fine is to silence criticism of the government (or at least limit such criticism to those wealthy enough to shell out $32,000 whenever they open their mouths).

The proposed Internet censorship bill has sparked similar cynicism in the Russian populace. Neither Putin nor Kremlin spokesmen have commented on the bill, though the AP reports that members of Putin’s party had a large hand in writing it.

Outraged Russians made the hashtags #RUWikiBlackout and #Википедия (Wikipedia) trend on Twitter Tuesday afternoon, along with tweets containing the numerical sequence 89417-6.

Any ‪#Anonymous members out there? This is a distress call.

Of course, the bulk of the online outrage was in Russian.

Twitter user MarsDreams had nothing to say about the bill itself, but the Wikipedia shut-down protest annoyed him immensely.

According to Google translate, that means “NOW AND HOW TO WRITE ESSAYS, DIPLOMAS, take tests??? / Do not have to close the site #Wikipedia …… pleeeeease!!”

(Last January, when the English-language Wikipedia planned a similar one-day shutdown to protest America’s proposed SOPA law, outraged students urged Wikipedia to reconsider on the grounds that one day without Wiki access could destroy their academic careers.)

Wikipedia founder Jimmy Wales also weighed in on the Russian site’s blackout, telling the Washington Post, “One of the things that tends to rally people together very much is that the conditions which allow us to do our work are really, really important, not just for us, but for the entire Internet.”