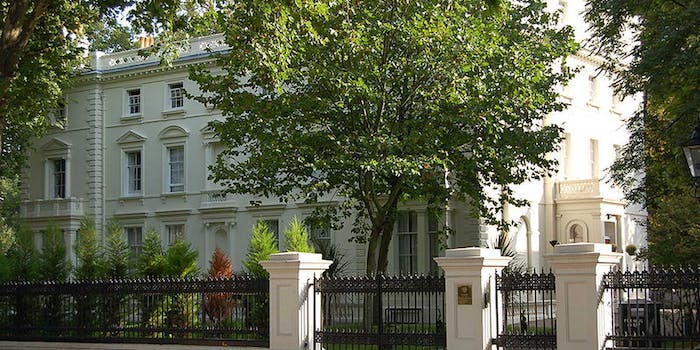 "The Russian President has not used the right to deploy forces abroad." Wait, what?

As terrifying as the situation in Ukraine is—government assaulting protesters, protesters overthrowing their government—at least it seemed we could agree that Russia had moved troops into the country.

But when Louise Mensch, a former member of the U.K. Parliament, began tweeting about what might happen next, she got a strikingly candid look at the country’s mentality from the Russian embassy. You see, despite Foreign Minister Sergei Lavrov’s insistence that Russian troops had moved into the semi-autonomous region of Crimea “until the normalisation of the political situation,” the country is presenting the troop movement as simply protecting ethnic minorities around its Crimean military bases.

The conversation started with Mench tweeting into the ether.

The only real “red lines” belong to Vladimir Putin. And they are marching west. #Obama #Ukraine #weak #tcot

A few minutes later, the verified @RussianEmbassy reached out to her.

@LouiseMensch Please read https://t.co/ODvf7pw83w to have a fuller picture of the situation.

Mench noted that Putin’s arugments for being able to move into Crimea were much like the ones he used to dissuade the U.S. from military intervention in Syria:

. @RussianEmbassy Your Excellency might consider: https://t.co/wnaFUiM8W5 “decisions affecting war and peace should happen only by consensus”

That’s when it started getting iffy.

The embassy doubled down.

@LouiseMensch The Russian President has not used the right to deploy forces abroad. We hope for a political settement.

.@RussianEmbassy He has not? Am I to take it he considers the Crimea actually annexed? #Ukraine

@Jamie4Labour @LouiseMensch Russian Black Sea Fleet base is located in the Crimea.

.@RussianEmbassy @Jamie4Labour you assert your forces are confined solely to your base? You have not “used the right” to “deploy abroad”?

. @RussianEmbassy Could you comment on @marcorubio‘s call for your expulsion from the G8 if you do not withdraw your tanks? #Ukraine

But the embassy wouldn’t go there, wrapping up the conversation.

@LouiseMensch @marcorubio The Russian Embassy in the UK only engages in conversation and debate with UK MPs!