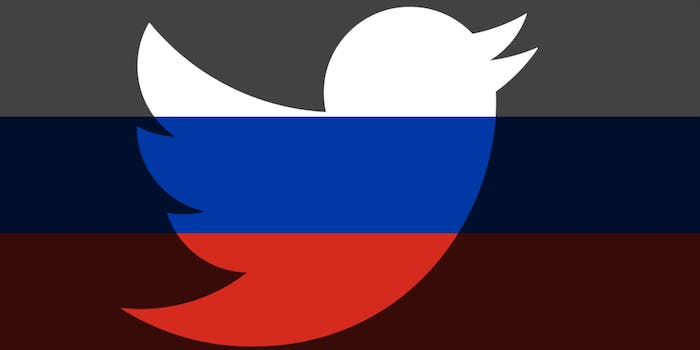 A Russian official has threatened a looming block against Twitter, then retracted that statement after being rebuked by the country’s prime minister—through, of course, a tweet.

It’s yet another example of the confusion set forth through the country’s recently-passed “blogger’s law,” an apparent attempt to crack down on popular online text that the state deems inaccurate. The blogger’s law stipulates that every site with 3,000 daily visitors—it’s unclear whether that’s 3,000 on average or just on its best day—must register with their full names for a news license.

It’s enforced by Roskomnadzor, the government regulatory body that has previously temporarily blocked Facebook for a group that advocated smoking, YouTube for a video in which a makeup artist shows how to fake a slit wrist, and Wikipedia for an article on marijuana.

On Thursday, state news agency Pravda reported Roskomnadzor deputy head Maksim Ksendzov saying that foreign sites like Twitter, which certainly has more than 3,000 visitors a day, would have to follow the new law. “There is always a limit to disruptive interactions,” Ksendzov said, according to the English-language edition of Pravda. “The state can not nothing [sic] else but protect the interests of the society.”

Ksendzov indicated that if Twitter refuses to cooperate, it would be its own Russian users who suffer. “By refusing to fulfill legal requirements of government agencies, corporations set up their users,” he said.

Translated: “Laws are mandatory for everyone. But certain officials should think before announcing blocking of social networks in an interview.”

After that tweet, Ksendzov changed his tune, telling Interfax that: “No one was talking about blocking of the popular social networks in Russia: It was about the fact that administrators of certain resources, Twitter in particular, does not react to our inquires related to applying Russian laws prohibiting sharing of extremist information.”

Twitter has a history of fighting government censorship, but still abiding by local laws. After Turkey’s legally contentious, weeks-long ban of the service earlier this year, the company agreed to censor the accounts of two users who had been leaking government information.