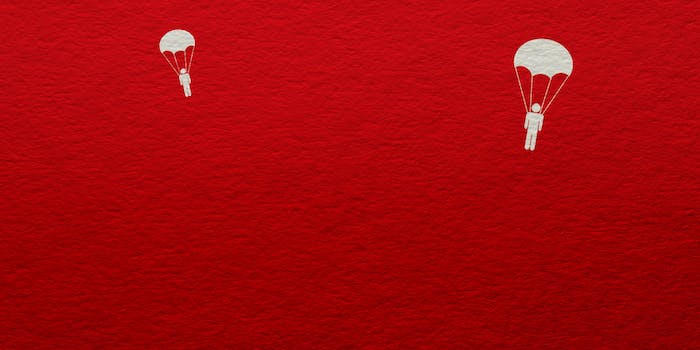 The depicted act is an apparent violation of the Geneva Conventions.

Online video published Tuesday purports to confirm that militants fired on Russian pilots as they parachuted into northern Syria after being hit by a Turkish missile.

According to the Geneva Conventions, such activity is a war crime. The video, embedded below, doesn’t depict clear violence, though it does show two parachuting figures accompanied by the sounds of gunfire. A deputy commander of the Syrian Turkmen brigade told Reuters that his forces opened fire as they tried to land after ejecting, and that “Our comrades opened fire into the air and they died in the air.” Russian officials, however, claim that one of the pilots is still alive and captured by the Turkmen.

The pilots, according to Reuters, were in a Russian jet that controversially entered Turkish airspace along its border with Syria, presumably en route to a strike on the terrorist Islamic State, which controls territory in Syria and Iraq. Separate video obtained by the Turkish Hurriyet appears to show the plane crashing after being hit. It reportedly then landed in an area of Syria controlled by Turkmen, who are among the many rebel groups openly operating in that country.

Russia has recently escalated such attacks on ISIS. But on its route, Turkey said, this Russian jet allegedly entered Turkish airspace. Turkish officials readily admit they shot down the jet, but stressed that they didn’t know what the aircraft was, never gave clearance, and that they warned it “10 times during a period of 5 minutes” before firing a missile. Russian president Vladimir Putin, who insisted the plane never entered Turkish airspace, called the act “a stab in the back” and accused Turkey of being “accomplices of terrorists.”

Turkey has repeatedly been accused of at least indirectly enabling ISIS. Under President Recep Tayyip Erdo?an, the country has renewed its crackdown on independence-seeking Kurds in Turkey—and Kurdish fighters are among the major forces fighting ISIS in Syria, as well. The U.S. criticized Erdogan for not allowing Kurds in Turkey to openly enter Syria to fight ISIS.