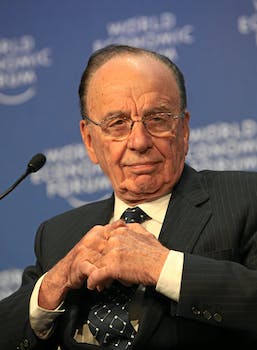 News Corp. CEO calls Google "pirates" and lambastes President Obama—then gets a taste of his own medicine.

Who needs a media empire when you have Twitter?

Over the last three days, media mogul Rupert Murdoch has been spilling his guts on Twitter on topics like the Stop Online Piracy Act, Google, and the Golden Globes.

“So Obama has thrown in his lot with Silicon Valley paymasters who threaten all software creators with piracy, plain thievery,” Murdoch tweeted Saturday.

Murdoch appeared to use “software” as a catch-all term for digital creative works, including movies and music, not just computer code, and to Obama’s trip last year to Silicon Valley, including a dinner with several chiefs of tech companies.

Murdoch also turned up the heat on Google and its anti-SOPA sentiments, calling the company a “piracy leader.” Google, in turn, called Murdoch’s charges “just nonsense” in a statement to CNET, a tech news site.

Like most tweets from SOPA supporters, Murdoch’s were met with much disdain from Twitter users, who flamed Murdoch for everything from his ownership of Fox News, to hacking committed by his British newspapers, to his lack of knowledge about technology.

“you have no right to criticize anything!” tweeted Sabrina Klein (@SAKlein21). “You are a liar and a disgrace to the news as a whole!”

“The problem is that Its not just ‘that’ simple,” tweeted Duran Goodyear (@alphex). “Your ignorance of the technology precludes you from being an expert on this.”