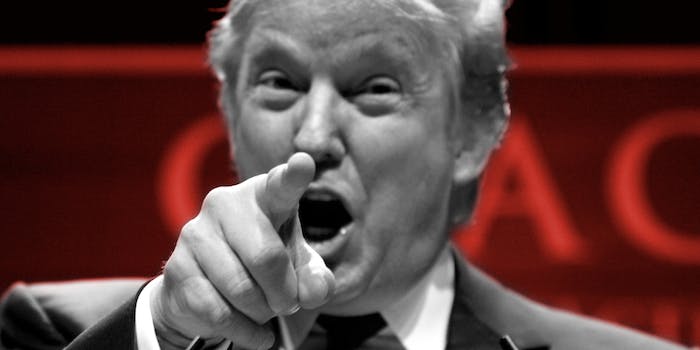 If you listen closely, you can hear the champagne glasses clink at Hillary HQ.

It didn’t take long for Donald Trump to throw the first official debate of top-tier GOP 2016 candidates into chaos.

In front of a mostly full house at Cleveland’s Quicken Loans Arena Thursday night, debate moderator and Fox News host Bret Baier asked the 10 Republican presidential hopefuls whether or not they pledged to keep their aspirations to the Oval Office within the confines of the party. While Baier addressed the question to everyone, it was clearly directed at the man standing in the center of the stage: Trump.

Baier wanted to know if Trump would consider running as an independent if his current lead in the polls doesn’t eventually translate to a victory in the primaries. When Baier asked any candidate open to a third-party run to raise his hand, only Trump’s didn’t stay by his side.

The arena immediately erupted in a chorus of boos. “I cannot say I have to respect the person that wins,” said Trump. “If I’m the nominee, I pledge I will not run as an independent. I want to win as a Republican.”

While the reaction among the crowd to Trump’s willingness to defect appeared negative, onstage it was positively visceral. “He buys and sells politicians of all stripes,” erupted Sen. Rand Paul (R-Ky). “He’s already hedging his bet on the Clintons.”

The anger among Trump’s opponents is understandable. The real estate mogul and reality TV star’s populist message has resonated with a considerable number of extremely conservative voters traditionally aligned with the Republican party. A third-party run siphoning off even a relatively modest number of those voters would almost certainly give an enormous advantage to the Democratic nominee.

It’s a situation that Democratic front-runner Hillary Clinton knows all too well. When Bill Clinton ran for president in both 1992 and 1996, Ross Perot, running first as an independent and then for the Reform Party, attracted a significant number of votes that would have otherwise gone to the Republicans.

The analysis on social media was that a third-party run by Trump would be a disaster for the GOP.

Let's all HOPE Trump runs as an independent. Could single-handedly give the election to the Democratic nominee.

If Trump runs as an independent, Clinton is president. Period. Anyone who denies that is delusional.