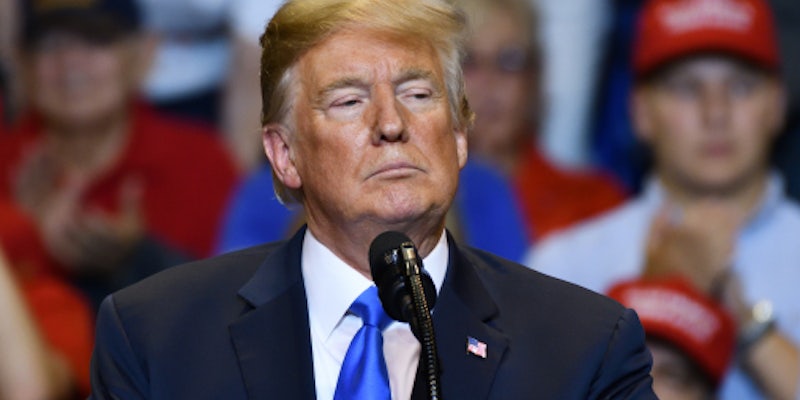 Golfing or arresting Joe Biden—Trump flew to D.C. for something and the internet has theories

Former President Donald Trump traveled to Washington, D.C. on Sunday. The apparently unannounced trip set off a flurry of speculation about why he is in the nation’s capital.

Some of the more popular theories are that he is testifying before a grand jury, is receiving medical care at Walter Reed, or even that he’s been arrested. The first two are at least possible, but the last seems highly unlikely.

Footage of Trump deplaning in Washington, D.C. on Sunday afternoon shows him wearing white shoes and carrying what appears to be a red hat, leading some to surmise that he came directly from the golf course in New Jersey, where he stays in the summer months.

Citizens for Ethics pointed out that Trump also has a golf course near Dulles International Airport. Others argued that, given the late hour, there probably wasn’t enough daylight to play more than a couple holes at best. Further, the rainy weather in the capital on Sunday isn’t ideal for hitting the links.

The theories only got wilder and more satirical from there.

A Truth Social user wondered if the video of Trump captured by YouTuber Andrew Leyden (PenguinSix) was “actual or fake footage?”

(There’s no evidence the footage is inauthentic and prominent pro-Trump accounts don’t appear to be disputing it.)

One joked that the government is trading Trump for basketball star Brittney Griner, who is currently imprisoned in Russia, and “a third-round draft pick.” Another claimed that he is having top secret documents extracted from his colon.

No one knows for sure why Trump is in Washington, D.C., though some were happy to assume that he’s about to be reinstated as president, a prominent conspiracy theory on the pro-Trump internet. QAnon conspiracy theorists naturally joined the discourse with similar thoughts, including that he’s in the capital because the 2020 presidential election is finally being overturned.

“Sumpin’s up and it won’t be good for the deep state!” opined another.

Several suggested that the governement should take advantage of his absence and look for the documents that were reportedly missing from the boxes the FBI seized from Mar-a-Lago last month.

“Might be a good time to search Bedminster for the missing top secret folders,” opined @lewing99.