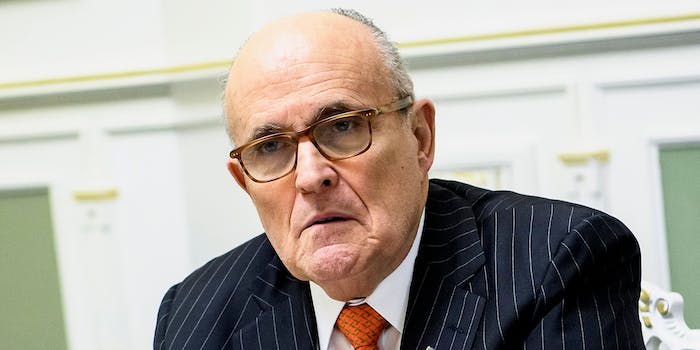 Giuliani's was caught doing his racist impression on a hot mic after interviewing Sean Spicer.

President Donald Trump’s personal lawyer Rudy Giuliani made one of the oldest and sloppiest mistakes in media when he did a racist impression of Asian people into a hot mic following his interview with former White House Press Secretary Sean Spicer.

Giuliani was interviewing Spicer for his podcast, Common Sense, according to the Daily Beast, who originally reported the story. The interview appeared to take place on Tuesday, and Giuliani uploaded the footage to YouTube on Wednesday.

Giuliani has since made the video private on his own YouTube account, but Quick Highlights re-uploaded the offending portion. The full version reportedly features several minutes of silence before Spicer appears briefly to sign out. Giuliani then makes small talk with several people who are out of frame, seemingly unaware that he is still being recorded.

One of those people appears to be Jayne Zirkle, the conservative YouTuber who went viral after allegedly being bullied by her high school classmates for having campaigned for Trump in 2016. Giuliani tells Zirkle that she is “getting too upset” about something and then says she’s “going to be the most famous model in China.”

“Ah, get me Jane Zirkle,” Giuliani says in a racist, stereotypical Chinese accent.

Giuliani continues using the racist accent as he asks, “What would you like for dinner?” and replies to himself, “Jayne Zirkle picture, Jayne Zirkle picture.” He then presses his hands together and bows twice while repeating Zirkle’s name in the accent.

China has apparently been on Zirkle’s mind lately as well. Her pinned tweet from Oct. 12 reads, “A vote for Joe Biden is a vote for the CCP!,” which appears to be a reference to the Chinese Communist Party.

Giuliani has some prior experience with saying inappropriate things while being unknowingly recorded. Almost exactly one year ago, he butt-dialed an NBC News reporter and left a rambling, three-minute voicemail that became the butt of many Twitter jokes.

Giuliani did not immediately respond to the Daily Dot’s request for comment regarding the racist snafu.