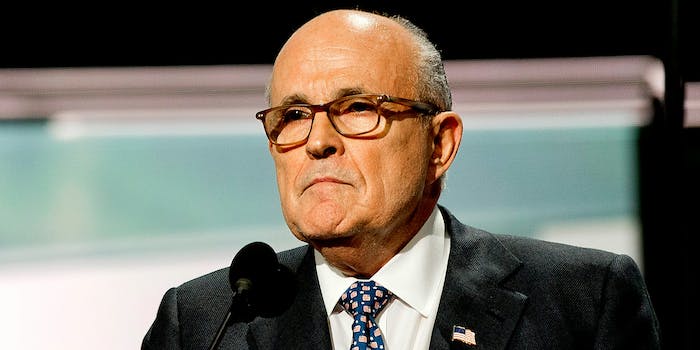 Yesterday, former FBI Director James Comey spent his second day on Capitol Hill testifying about his role in the 2016 election and the investigation launched into President Donald Trump’s campaign ties to Russia.

It was another day that left supporters of the president furious, as Republicans grilled Comey over the same issues they’ve been hyping in the public sphere since Trump won: bias among FBI agents leading the investigation, the use of the infamous Steele dossier to open an investigation into Trump, Comey leaking memos of his conversations with Trump, and their latest pet peeve, the supposed entrapment by the FBI of Michael Flynn, who pled guilty to perjury charges.

Particularly still upset over the state of affairs was Trump’s personal lawyer, Rudy Giuliani, who decided that it was time to add Comey’s name to the national lexicon as someone who interferes in a national election.

Comey proven leaker of confidential FBI material directed the violation of General Flynn’s right to counsel and set up a false statement charge FBI didn’t believe was false. Comey interfered more in election than anyone. It has become a verb you shouldn’t “comey” an election.

“Comey” (v) means to interfere illicitly with an election. For example “The Chicago Democrat machine comied the 1960 election.” This usage derived from Comey’s interference in 2016 election by failing to prosecute and then an unprecedented release of incriminating facts.

Not only did the FBI’s interviewing of Flynn happen after the 2016 election, where it wouldn’t be possible to swing the outcome of the vote, Chicago Democrats using the names of dead people to goose the vote totals helped John F. Kennedy win.

Whatever Comey did in 2016 sure didn’t result in the loss of the candidate Republicans are trying to say he intervened against.