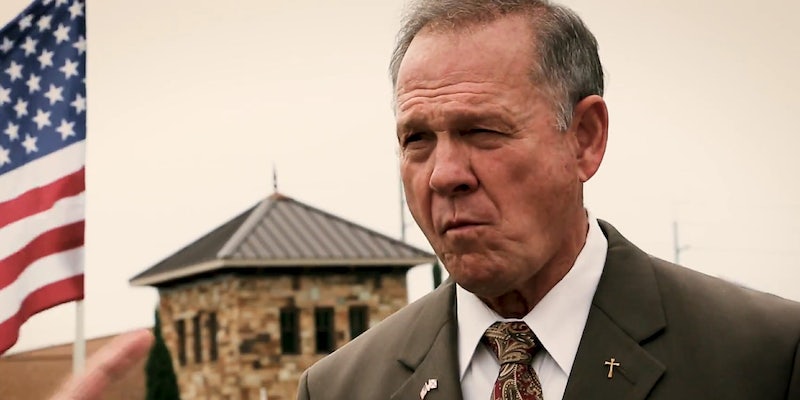 A woman says Roy Moore, the Republican nominee in Alabama for a U.S. Senate seat, of engaging in several sexual encounters when she was 14.

The Washington Post reports that Leigh Corfman has accused Moore of kissing her and telling her she was pretty in one encounter and in another encounter removing his clothes, touching her over her bra and underpants, and guiding her hand to touch him over his underwear. Corfman says the incident occurred in 1979 when she was 14-years-old and he was 32-years-old.

During the first encounter, Corfman says, Moore met her and her mother on a bench outside of a courtroom in Etowah County, Alabama, and offered to watch the 14-year-old while her mother went in for a child custody hearing. Corfman says he asked for the girl’s phone number and days later picked her up and brought him to his home where he kissed her.

During a second visit, Moore touched her over her bra and underpants, Cortman says, according to the Post.

“I wanted it over with. I wanted out,” Corfman told the Post. “Please just get this over with. Whatever this is, just get it over.”

Two of Corfman’s friends say she told them about “seeing an older man,” the Post reports, and one of them identified Moore as the man. Corfman’s mother, Nancy Wells, 71, says her daughter told her of the encounters more than a decade later.

In addition to Corfman, three other women told the Post Moore “pursued them when they were between the ages of 16 and 18.” Those women say he did not force them into any kind of sexual contact or relationship, according to the newspaper.

In a statement to the Post, Moore denied the allegations, calling them “completely false,” and a “desperate political attack by the National Democrat Party and the Washington Post on this campaign.” His campaign later added that the allegations were “garbage” and the “definition of fake news.”

None of the women donated to or worked for Moore’s opponent Doug Jones or his Republican rival Luther Strange, the newspaper reported. Corfman says she voted for Republicans over the past three presidential elections, including for President Donald Trump. The newspaper also confirmed that Corfman’s mother did attend a divorce hearing in February 1979 by obtaining divorce records.

Moore’s campaign also tried to preemptively get out in front of the Post’s report by speaking to Breitbart, a far-right website that caters to politicians like Moore, prior to the Post publishing its report. Steve Bannon—a former adviser to Trump and leading figure of Breitbart—campaigned for Moore earlier this year.

The website describes the Post’s report as “targeting” Moore. The details of the story were “obtained” by Breitbart after the Post reached out to Moore and his campaign for comment on the story.

The legal age of consent in Alabama in 1979, and now, is 16. The statue of limitations for bringing felony charges against Moore would have passed in the early 1980s, while civil action against him would have expired after Corfman turned 21.