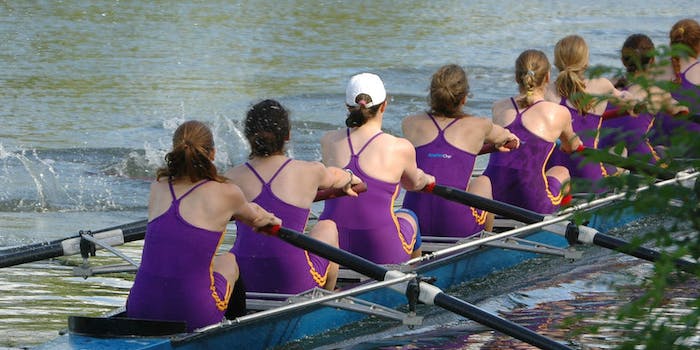 Someone's got a funny definition of "pornography."

This article contains material that may be NSFW.

For a company that has long made its name out on the bleeding edge of the Internet, Facebook has proved hilariously inept, time and again, at regulating potentially offensive content. They’ve taken down pregnant ladies, Arab women without veils, classical art, and, mind-bendingly, an argument against their wackadoo censorship policy.

Most recently, the social network was rankled by the success of the University of Warwick Rowing Society in raising thousands of pounds for Macmillan Cancer Support by selling a tasteful calendar depicting rowers in various states of undress. (We should mention that this is a ladies’ team—Facebook seems to disproportionately target women whenever they feel compelled to police users according to community guidelines.)

This is #pornography acc to Facebook. @nakedgirlsrow have been banned from Facebook after their nude charity calendar pic.twitter.com/j0Z1P1xEDQ

@nakedgirlsrow @facebook double standards at their very worst. The money raising these girls do is superb and important to the charities!

Every cloud has a silver lining…We are selling lots of calendars thanks to everyone’s support :) we thank you again pic.twitter.com/zrqJGt0c7u

In the end, unable to justify their unilateral action, Facebook relented.

We are so happy that @facebook have said removing our site was a mistake and that we have it back :)

Still can’t believe we have our Facebook page back after over a week of being out of action they gave in!!!

And the good news doesn’t stop there—a 2015 calendar is already in the works.

Welcome to our new followers. To thank you for your support here’s a photo from our recent shoot for the 2015 cal pic.twitter.com/KrTmSqO8h8

Meanwhile, the men’s rowing club at Warwick has been putting out its own nude calendar for a couple of years—proceeds go to Sport Allies, an athletic organization that promotes inclusion and challenges homophobia among young people. More proof, as if you need it, that clothes are only good for taking off.