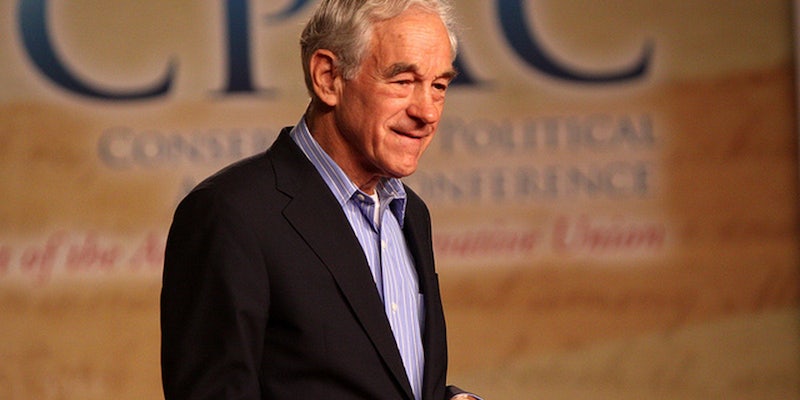 The Texas congressman is waging a video campaign against GOP frontrunner Newt Gingrich.

When Barack Obama announced on YouTube that he was running for president in 2007, it was viewed as just another Internet-driven innovation of his inventive presidential campaign. Now, with the 2012 Iowa Caucuses just a month away, YouTube is an established political battlefield. And  Ron Paul, the libertarian-leaning Texas congressman and Republican presidential candidate came out swinging last week against new GOP frontrunner, Newt Gingrich.

Modern-day campaign videos break the 15- and 30-second time limits of broadcast TV advertising—not to mention forgoing the big spending required to put a commercial on air. Paul’s campaign released two videos  last Wednesday, one flashy and one savage. The savage one used years’ of clips and news stories to paint Gingrich as a flip-flopping Washington D.C. insider. The video even recalled a climate-change commercial Gingrich did with then Speaker of the House Nancy Pelosi, something he said he later regretted.

At over two minutes long, it certainly won’t be making its way onto the airwaves in Iowa or New Hampshire soon, but it is getting attention. In just five days, it has earned more than 613,000 views and thousands of comments.

The strategy of going  after Gingrich is an obvious one for Paul. With Herman Cain’s fall from grace, Gingrich has surged in the polls. At least in Iowa, Paul is right behind him. Painting Gingrich as an insider could play well in the Hawkeye State.

Paul’s other commercial lags in views but made a mark with  its flashy style, which one commenter likened to a truck commercial, with text flying across the screen, explosions, and a fast-talking narrator. “Big Dog” talks up Paul’s past stances on budget issues and spending and notes how agencies like the Department of Education will be gone if the Texas congressman is elected. “That’s how Ron Paul rolls,” it states.

The video was quickly gaining views early this week. As of Monday night it had more than 40,000.

“That is one helluva ad!!! Ron Paul’s official campaign is much more on the ball this time around, compared to 2008, making powerful ads. He’s catchin’ on, I’m tellin ya!,” wrote TirebiterGeorgeL.

The  observation about Ron Paul’s upgrade is an ccurate one. In 2008, some of of Paul’s campaign ads looked like something a well-funded mayoral candidate would put out, not a presidential campaign. This time around Paul is spending smartly—on video production to cater to demanding YouTube viewers,  not airtime with old-line broadcasters. With yet another candidate validating YouTube as a political medium, the video site’s community will be the real winner, no matter who prevails in Iowa.