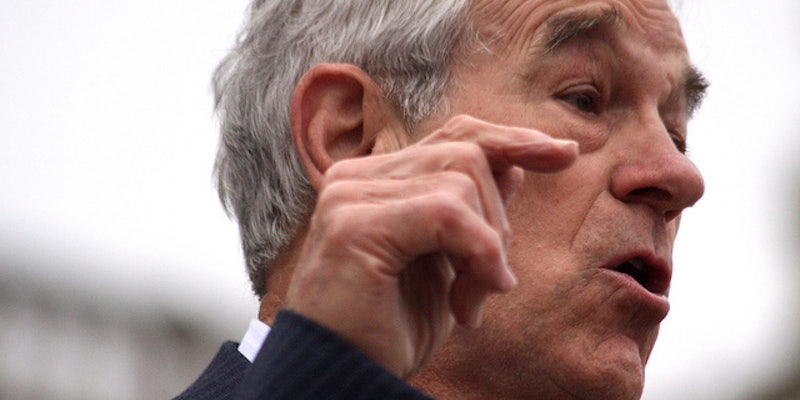 A federal court shot down a request by the campaign of Texas Rep. Ron Paul to find out who uploaded videos to YouTube that criticized former governor and ambassador Jon Huntsman. The lawsuit accuses the “John Doe” users of false advertisement and libel.

The video, posted on Jan. 4 by YouTube user NHLiberty4Paul, paints Huntsman as having loyalties to China, where he served as ambassador under President Barack Obama, over the United States. The minute-long video features footage of Huntsman, who dropped out after coming in third in New Hampshire, speaking Mandarin.

The video asks whether Huntsman has “American values or Chinese” values, labels Huntsman as the “Manchurian Candidate,” and ends by asking “What exactly does Huntsman stand for?” It then encourages viewers to vote for Paul. It’s been viewed 328,000 times.

Paul’s lawyers argued that because the end of the video asks people to vote for Paul, it would appear that he had endorsed the creation of the insulting clips, even though he didn’t. The court ruled that that was not a good enough reason for the companies to disclose the information at this point in the legal process.

Lawyers told PaidContent that they wouldn’t give up their efforts to disclose the identity of the “Does” (a legal formula for unidentified parties to litigation).

Another potential blow to Paul’s legal case, if not his campaign: If this video was, as the lawsuit suggests, put up in an attempt to associate Paul with an unsavory smear on Huntsman, YouTube commenters don’t seem to be fooled. It’s drawn 5,109 dislikes to just 195 likes, an exceptionally high ratio, and a fair share of the comments are skeptical.

“Any crackpot can upload a video to YouTube and make any claim they like. There is no endorsement from [Ron Paul], so move along … nothing to see here,” wrote michaelfranzau.