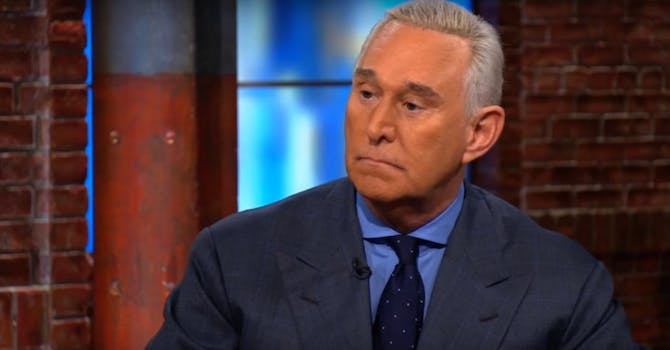 He could face a permanent ban.

Political operative and Trump ally Roger Stone was suspended from Twitter on Saturday following an expletive-rich series of personal attacks against CNN. Not just the cable news channel as a blank stand-in for his disdain toward the mainstream media, either—Stone went personal.

On Friday CNN reported that Robert Mueller’s ongoing investigation into the president’s Russian ties had its first charges. A grand jury reportedly approved them, and CNN claimed an arrest could come as early as Monday. Then Stone stepped in to blast the on-air talent, including Jake Tapper, Ana Navarro, and Don Lemon via tweets, writing:

.@donlemon stop lying about about the Clinton’s and Uranium you ignorant lying covksucker !!!! You fake news you dumb piece of shit.

.@donlemon must be confronted, humiliated, mocked and punished. Dumber than dog shit.

.@donlemon you come across on tv as a dull witted arrogant partyboi. You lie constantly and no one who knows you thinks you r bright

No .@CharlesBlow YOU Lie- u have no cried you fast talking arrogant fake news piece of shit !

.@donlemon there r no credible “fact-checks” that clear the Clinton’s on Uranium. Even the people at CNN say u are a buffoon behind you back

Stone told CBS news that he’d violated the site’s terms of service with the tweetstorm. “This is a strange way to do business and part and parcel of the systematic effort by the tech left to censor and silence conservative voices,” he wrote in an email to Politico. Stone also said he would seek legal action against the social media giant.

According to USA Today, the ban could be permanent because of Stone’s “targeted abuse.” Stone remains suspended as of Sunday morning.

Stone has been a D.C. political operative since the Nixon administration, and was an adviser to the Trump campaign last year.