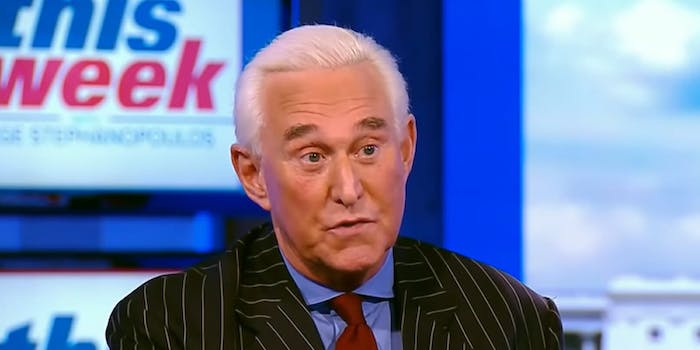 Stone has been criticized for his Instagram posts before.

Roger Stone could be in more legal trouble after he posted an Instagram photo that may have violated his gag order.

Stone, who was charged by Special Counsel Robert Mueller as part of his investigation into the 2016 election, reportedly posted a photo on the social media site of himself with the text “who framed Roger Stone?” written over him.

CNBC reports that Mueller notified a federal judge about the Instagram post, but did not ask Judge Amy Berman Jackson to find whether Stone violated the gag order that was issued to him following another questionable post. Stone has since removed the post.

Last month, Stone posted a photo of Berman Jackson that had a small crosshairs in the upper left-hand corner. It was deleted shortly after it was posted.

In subsequent posts, Stone explained that “any inference that this was meant to somehow threaten the judge or disrespect court is categorically false” and that the crosshairs were a logo of the website where he took the image from.

Following the posting of that image, Berman Jackson was given a full gag order, which barred him from making any public statements about his legal situation.

At the time, Berman Jackson said if he violated the gag order she would revoke his bail and send him to jail for the duration of his trial, according to the New York Times.

“This is not baseball,” she said, according to the news outlet. “There will be no third chance. If you cannot abide by this, I will be forced to change your surroundings so you have no temptations.”