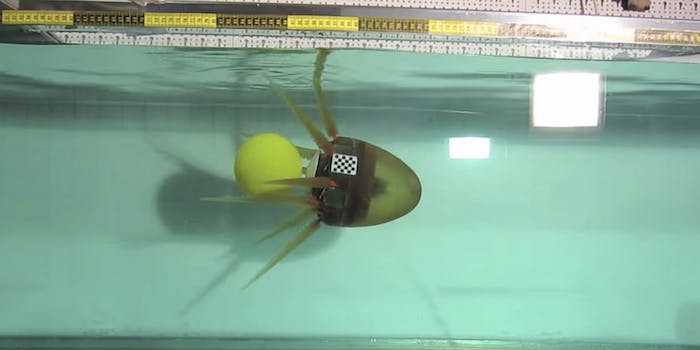 Watch a video of the world’s first robot octopus

With its creepy-crawly tentacles, judgmental eyes, and lack of exoskeleton, the octopus is definitely one of the most frightening creatures in the ocean. But you know what’s even more terrifying than a regular octopus? An indestructible octopus robot.

Satisfying the demands of absolutely no one, the folks at the Foundation for Research and Technology-Hellas (FORCE) in Greece have created such a being. Introducing the world’s first robotic octopus, an eight-legged aquatic contraption that looks like a cross between a cephalopod and a medieval torture device.

Here, watch it creepily propel itself forward with its spindly tentacles like something out of your deepest, darkest nightmares.

Just like a real-life octopus, the robotic octopus propels itself forward by pumping its eight limbs in a synchronized motion, a process known as “sculling.” The robot is made of flexible silicone and has webbing between its tentacles, which makes it move even faster through the ocean. It can also pick up and carry objects. If that thought alone doesn’t terrify you, imagine that thing coming after you with a bunch of severed baby doll’s heads in its tentacles.

So other than being bizarre and terrifying, what, exactly, is the purpose of this robot octopus? Apparently, FORCE has been testing it out in the Aegean Sea, where it was followed by schools of small fish confusing it for the real thing. This means that the robot octopus could potentially be used for “non-disruptive ocean life surveillance,” which is totally fine by us. Better that thing scare the crap out of sharks and fishes down there than come up on land and do the same with humans.