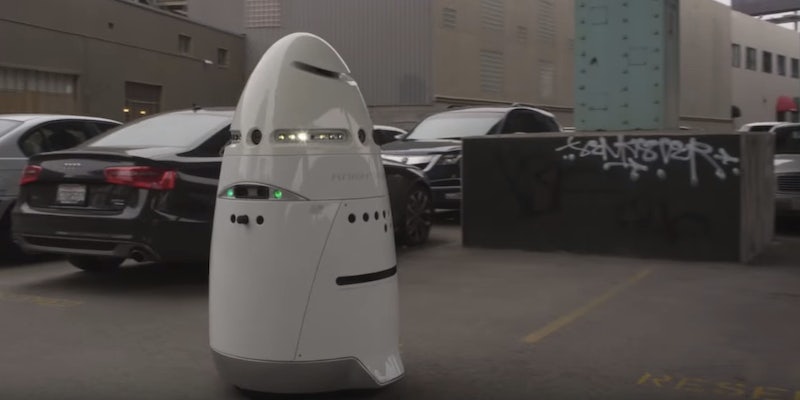 The 300-pound robot rolled right over the toddler.

The oblong security robots that are equal parts creepy and helpful with just a dash of Dalek are popping up everywhere from shopping malls to tech company campuses. Created by Knightscope, the five-foot-tall, 300-pound K5 robots roll around and monitor areas for criminals and changes in the environment.

At the Stanford Shopping Center in Palo Alto, California, a 16-month-old boy was injured by the robot after the device ran into him and just kept going, ABC 7 news reported.

According to his parents, the robot hit Harwin Cheng’s head, causing the boy to fall down. The robot proceeded to move forward, running over Cheng’s right foot, resulting in a minor injury.

The security guard at the shopping center reportedly told the family that another child was injured by the robot recently, too.

Neither Knightscope nor the Stanford Shopping Center replied to the Daily Dot’s requests for comment, but the robot makers told Fusion the incident at the mall was the first of its kind and that robots have logged 35,000 hours and 25,000 miles of travel time. Stacy Stephens, vice president of marketing at Knightscope, said the report of a robot injuring a child is “horrifying,” and the company has reached out to the family with an invitation to join them at the office so employees can personally apologize.

The shopping center has reportedly launched an investigation into the incident and has docked the robots until it is complete.

Automated safety tools like the security robots patrolling large areas rely on sensors and other preprogrammed features to recognize objects and potential threats.

The robot’s failure to recognize a child is not the first time a popular automated service failed. Earlier this year, Consumer Reports found that the Summon feature on Tesla vehicles that allows a car to park itself could not recognize small objects placed in front of it, including a duffel bag and a bicycle. Though the company quickly released a fix, the initial programming could have been problematic had a small child or animal stepped in front of the car.

For now, it might be a good idea to keep kids away from those egg-shaped rolling robots. At least until they can learn to recognize and avoid running into children.