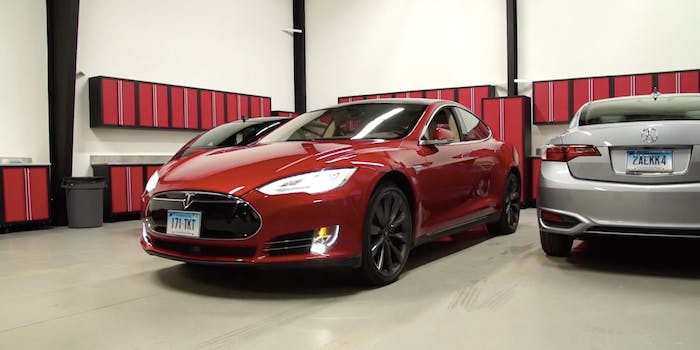 It's a small change, but a safe one.

Getting autonomous vehicles in the hands of consumers starts small and slowly. In the case of Tesla, it’s about 1 mile-per-hour.

Tesla Model S vehicles have a feature called Summon, launched earlier this year, which lets drivers control their car without being in it—the Tesla can pull into and out of a garage and park itself.

It’s a neat remote driving feature, despite its turtle-like speeds and the requirement that drivers must be within 10 feet of the vehicle. Tesla CEO Elon Musk says Summon will become considerably more advanced, and soon: “In two years you’ll be able to summon your car from across the country,” Musk said when the update launched. “If your car is in New York and you are in Los Angeles, it will find its way to you.”

But according to Consumer Reports, the initial Summon engineering was a bit problematic and posed safety concerns. Since alerting Tesla to the potential issues, the company built a fix to be pushed as a software update this week.

The issue was with the Summon app and key fob that controlled the vehicle. You could either push a forward or reverse button on the fob to tell the Tesla where to go, or use the app to direct it. Consumer Reports found that if you dropped your keys or closed out the app, the Tesla just kept on moving.

Additionally, the Tesla vehicle didn’t recognize small objects in front of it, including a duffel bag and bicycle. Considering the size of those items, it’s likely the car wouldn’t recognize a small child or a dog in its way, either. (Tesla explains in the Summon dashboard that it’s still in beta and won’t stop for things like bikes.)

Tesla engineers reportedly worked out a solution by nixing the key fob operation and relying solely on the app to move the car automatically. Drivers will have to keep their finger on the phone screen in order to operate it, so if they drop their phone or close out the app, the car stops.

Tesla’s update comes on the heels of a new report that demonstrates how skeptical Americans are of driving or being a passenger in a self-driving car.

Forty-three percent of people surveyed believe driverless cars aren’t safe, and more than half wouldn’t ride in one. Although self-driving cars haven’t been in any terrible accidents and their development has the support of the federal government, people are still wary of welcoming them on the roads.

The slow speed at which Summon is required to operate makes the safety issue Consumer Reports found pretty non-threatening, but identifying these types of concerns early can help engineers design safer cars in the future. If no dead man switch was available before Tesla rolled out a feature that drives fully autonomously at speeds greater than 1 mile per hour, the safety concerns would be much worse.