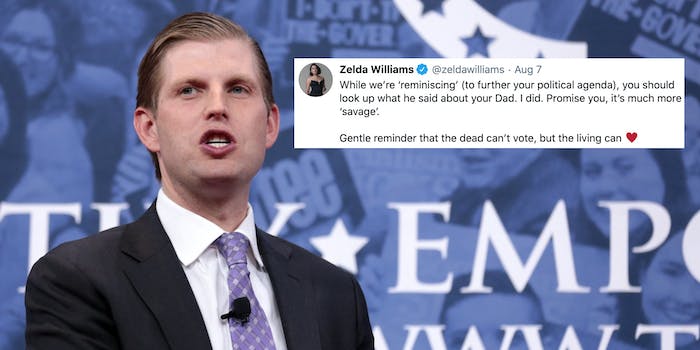 'You should look up what he said about your Dad. I did.'

Eric Trump drew the ire of Zelda Willians, the daughter of late comedic legend Robin Willians, after tweeting out a video of her father poking fun at Joe Biden.

The young Trump shared a clip from the 2009 HBO special “Weapons of Self Destruction,” which had already gone viral on social media, in which Williams mocks the presumptive Democratic nominee.

“We still have comedy though, we still have great comedy out there. There’s always rambling Joe Biden,” Williams jokes. “What the fuck. Joe says shit that even people with Tourette’s go, ‘No, no. What is going on?'”

The tweet eventually caught the attention of Zelda, who pushed back on what she saw as an attempt to portray her father as sympathetic to President Donald Trump.

“While we’re ‘reminiscing’ (to further your political agenda), you should look up what he said about your Dad. I did,” she tweeted. “Promise you, it’s much more ‘savage’.”

Zelda also use the opportunity to encourage her followers to vote in the upcoming presidential election.

“Gentle reminder that the dead can’t vote, but the living can,” she said.

Critics of Eric quickly began flooding his Twitter page with copies of the clip mentioned by Zelda.

In the 2012 video, Williams described Trump as “scary” and mocked his comments regarding Ivanka Trump’s appearance.

“This is a man who said, ‘My daughter is hot,'” Williams said. “Even people in Arkansas went, ‘That’s fucking wrong. That’s just way out of place.”

Anticipating a backlash from fans of Trump, Zelda bowed out just minutes after making her statement.