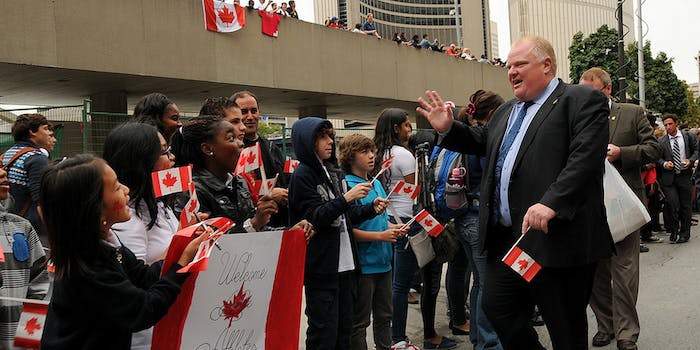 These Rob Ford fans may just give him a second term

Some people don't know the meaning of the term "lost cause."

Disgraced Toronto mayor Rob Ford, who was caught on video smoking crack cocaine and subsequently embarrassed the city of Toronto in numerous other ways, might actually win reelection in October. If he does, it’ll be thanks to the indefatigable and inexplicable support of the Ford Nation.

One might think that Ford’s documented history of repeated unprofessional conduct, including violent outbursts and sexist comments, would be enough to deter even the most politically ignorant and stubborn voters. Yet through it all, the Ford Nation persists. Here are some of the people who will be responsible for a Rob Ford reelection victory on Oct. 27, should it occur.

Rob Ford just said ” ehh, come stai?” in a speech for council. Its just that easy to win over my vote. #fordnation

If all it takes is an inarticulate phrase to win your vote, you should probably stay home.

@Ford_Nation_ had my Ford Nation T shirt on today! Enjoyed some great conversations. Rob has our vote was said quite a few times today!!

We pity anyone who goes anywhere with a person in a Rob Ford shirt.

“#Love is the absence of judgment.” #DalaiLamaXIV #Fordnation

Even the Dalai Lama would want to punch something if he saw how his wisdom was being perverted.

This guy will be pleased to hear that Rob Ford is on it.

The pun in this tweet is so bad that it’s almost as bad as Rob Ford’s record. And as if that pun isn’t bad enough, the conversation continued:

This man is not above using a distorted Ford campaign talking point to savage Ford’s main opponent.

We have a feeling Ford Nation memorabilia isn’t exactly in high demand.

This seems like a situation where “if” should be used in place of “when.”

@ddale8 lol are you for real? It was implied as a joke. I’m here and witnessed it myself. Anything to try and bring him down eh?

This young woman is a great example of a staunch Rob Ford defender, because she is also…

@justinbieber I love you sweetheart💕 you inspire me every single day. Because of you, I am a better me. #thisisforever #youremy#1 #myking

@Ford_Nation_ thanks for the follow!! Need a sign for my lawn up here in Orillia!! “4ORD” more years baby!!! Ya baby pic.twitter.com/TZYrYXzp40

Perhaps the best argument against Rob Ford is that some of his supporters appear to be Americans.

Photo via shot7photos/Flickr (CC BY 2.0)