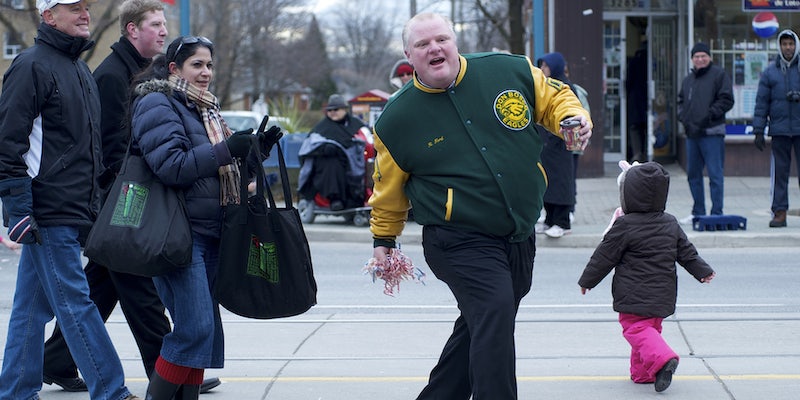 Police Chief Bill Blair said the recovered footage  was “consistent with what had been previously described in various media reports.”

Back in May, a tape surfaced allegedly depicting Toronto Mayor Rob Ford smoking crack. A number of journalists were shown the video, including representatives of the Toronto Star and Gawker (who launched an ultimately unsuccessful attempt to crowdfund its purchase from the drug dealers who had it on offer).

Toronto Police Chief Bill Blair announced earlier today that his department has recovered a digital video file containing the missing footage and that it “consistent with what had been previously described in various media reports.”

The seized video was longer than the 90-second version previously shown to reporters, according to the Star. It, along with a second video, whose content is unknown, was pulled from a seized computer hard drive. They had been erased, but police forensics experts were able to recover them.

Blair made the announcement at police headquarters in Toronto following the release of related legal documents surrounding the investigation.

The original video also showed the mayor making homophobic slurs against Justin Trudeau, head of the country’s Liberal Party, according to media reports.

Part of a 500-page document called an ITO was released Wednesday. The document showed that after the allegations about Ford’s drug use arose in May, the department assigned one of its most experienced detectives to the case, homicide veteran Det. Sgt. Gary Giroux “to investigate the existence of a cellular phone containing a video of Ford smoking crack cocaine.”

An ITO (“information to obtain” a search warrant) is supposed to contain information that shows “reasonable and probable grounds to believe” a crime has been committed.

The National Post relates that the ITO includes pictures of Ford meeting with Lisi.

The two met in in parking lots, gas stations, a soccer field, and once in “the woods.” At one gas station, the document purports, when Ford went inside, Lisi secreted an envelope inside the mayor’s car.

The crack house at 15 Windsor Road, the scene of a much-duplicated photo in which Ford was seen with Andrew Smith, a man who was later murdered, and two others who were later arrested, was also under surveillance.

The ITO shows Ford called Lisi 44 times in March: “March 28, 2013: (Anthony Smith is killed). Lisi and Mayor Ford speak 7 times. The pattern expressed in the ITO is one of regular contact over months between the mayor and the alleged drug dealer.

Mayor Ford has not been arrested—yet. Blair said his department is continuing to gather information.

When reporters showed up at his home in the wake of the ITO release he screamed at them to get off his property. He has repeatedly and heatedly denied using crack. He has also denied the existence of the video of his taking the drug.