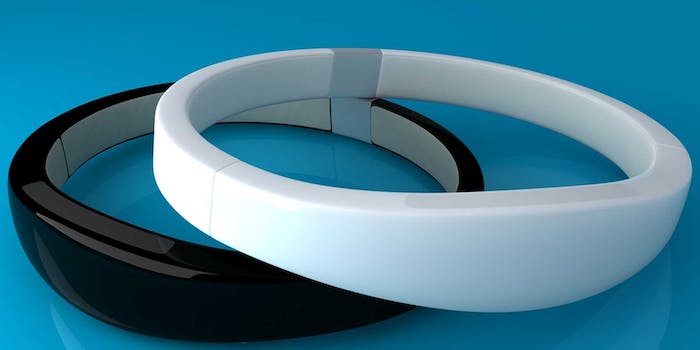 Ritot uses your skin for as a smartwatch display

Now this is a true wristwatch.

Four deveopers in San Jose claim to have made a cutting-edge smartwatch that can project the time onto your hand—and not surprisingly, Indiegogo backers are going wild for it.

According to the crowdfunding campaign, the Ritot smartwatch is a wristband that at the touch of a button or a shake of the hand projects notifications like missed calls, text messages, reminders and alarms onto your skin. A wireless charger for the watch doubles as an interface where users can customize the color of the projection. But the watch doesn’t actually tell time unless you’re projecting it onto your hand—the rest of the time, it looks more like a chunky bracelet or a FitBit Flex. The device will sync with iOS, Android and Windows Phones, according to the creators.

Ritot’s campaign page does raise one major red flag, however: The press materials appear to be stock photos to which a photorealistic rendering of the smartwatch has been added—meaning there’s no real evidence that a prototype exists yet. (Kickstarter, unlike Indiegogo, forbids photorealistic renderings of products precisely because they can mislead backers into thinking a project is further along than it is.)

If production and manufacturing goes as planned—which doesn’t always when it comes to crowdfunding, even when everything is legit—the watch will ship in early 2015.

H/T The Next Web | Photo via Ritot/Indiegogo