What we learned from a 7-year tour of @everyword

Parting is such sweet sorrow. Or hardship. Or agony.

Early on the morning of Friday, June 7, the Twitter account @everyword—where a different (English) word has been posted every 30 minutes since November 2007, in alphabetical order—will breathe its last. The automated feed, designed by programmer Adam Parrish, is a Python script built upon a lexicon of 109,000 words, and has very nearly exhausted that resource.

Big deal, you might think. But over the last seven years, @everyword has attracted nearly 100,000 followers from all walks of life. Indeed, the beauty of the account is that you don’t need to be a writer or etymology nerd to appreciate its simple, deadpan charms. (A look at the list of top-favorited tweets, including “titties,” “swag,” “ugh,” and “yo,” may confirm this.) 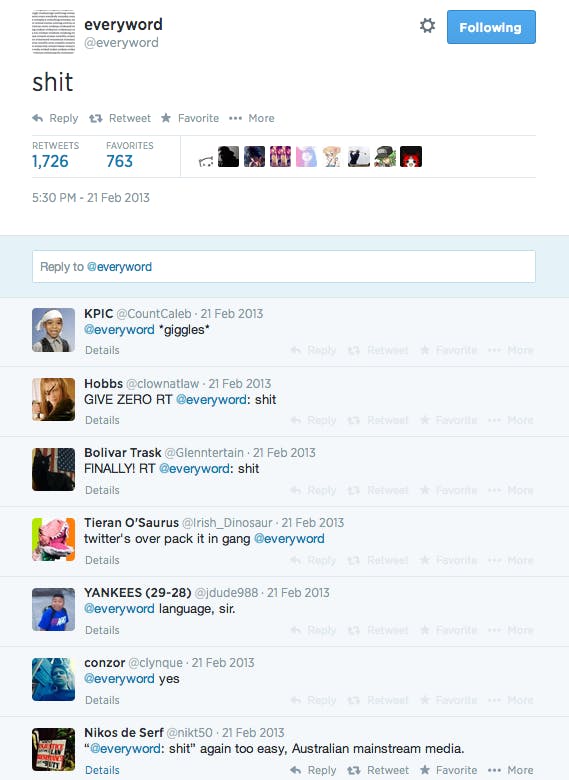 What, then, was the true appeal of @everyword? That it allowed us to take a leisurely journey through our language, pausing in all sorts of unfamiliar nooks and crannies, is certainly part of the equation. I can’t tell you how many posts sent me running to a dictionary, to find the definition of whatever odd arrangement of letters I’d just read.

Beyond education, though, @everyword had an uncanny knack for summing up everything about your life in a given moment. Scrolling through tweets with a blasé air, you’d run across “whatever.” Feeling especially proud of yourself, you might encounter “congratulations.” And in the same way that repeating a word makes it lose all meaning, a word alone, out of context, becomes a strangely curious artifact. After all, words are just the building blocks or DNA of thoughts; we rarely consider them on their own terms.

But as Parrish explained in a blog post, these tweets did enjoy a certain context—and not just that provided by a reader’s own experience. Because they appear interleaved in a feed, they can color or cleanse the space between other people’s links, quips, and hashtags. Moreover, the words themselves often interrelate in a deeply satisfying manner. Whatever the allure, many of Twitter’s finest will shed a tear at the close of the era bracketed by @everywords—a rather long one, by Internet standards. They may find solace in @PowerVocabTweet, Parrish’s list of fake yet almost plausible words, though we wouldn’t be shocked if he cooked up something new and wonderful: @everynumber, perhaps?