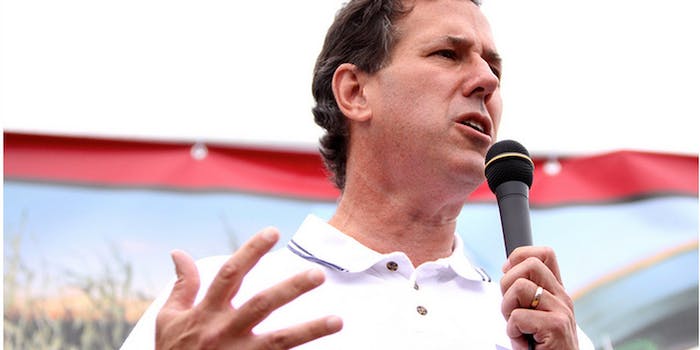 Why Rick Santorum isn’t getting retweets

The Republican candidate's political positions are controversial. But his tweets are blisteringly bland.

According to Zach Green, the mastermind behind political Twitter-tracking website 140elect.com, Santorum has been retweeted the least among the Republican candidates. On average, @RickSantorum scores just 21 retweets per message.

Green came up with the figure by adding up the candidate’s retweets and dividing it by the number of tweets sent. Only data gathered from the candidate’s personal account, not generic campaign accounts, was used.

Even some of those who dropped out of the 2012 hunt beat Santorum’s score.

“My Worst Tweeter Award is confirmed by the numbers! @RickSantorum is the least retweeted candidate. Even @TimPawlenty did better,” wrote Green.

Ron Paul led the pack with an average of a 125 retweets per tweet, not surprising for the policy-driven candidate with a dedicated following.

Next up was front-runner Mitt Romney, with 111 per tweet, and Newt Gingrich with 53.

Looking at the candidates’ number of followers, you’d expect Gingrich to have taken the lead in the race for retweets, especially since the former House speaker has more than a million followers, hundreds of thousands more than his competitors. But then you have to remember the questions about how Gingrich built his follower base; lower retweet activity is a sign of a less-engaged Twitter readership.

So why is Santorum falling so far behind in the 2012 Twitter race? Green has a theory.