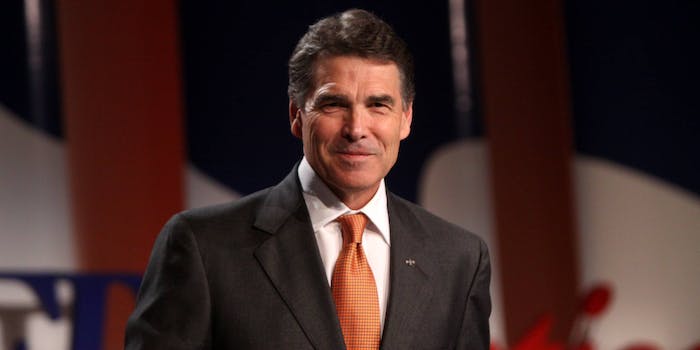 Rick Perry, who wanted to abolish Department of Energy, is now Trump’s top pick to lead it

It's also the department Perry famously couldn't remember the name of.

President-elect Donald Trump’s cabinet picks continue apace, with his reported nomination of former Texas Gov. Rick Perry to the top spot at the Department of Energy.

Perry’s involvement in a Trump administration was rumored shortly after the election, when the politician/former Dancing With the Stars contestant posted an image on social media with a caption about getting “a call to #makeamericagreatagain.” Sources report Perry had a meeting at Trump Tower earlier this week to discuss his post.

But it’s that his position is reportedly at the Energy Department that’s curious: In a debate during the 2012 primary season, Perry stuttered and forgot the name of the Department of Energy in a gaffe widely dubbed his “oops” moment. He was trying to name the three departments he’d abolish if he became president.

Furthermore, Perry “sits on two corporate boards … that may present a confirmation issue,” according to CBS, including that of Dakota Access LLC subsidiary Energy Transfer Partners.