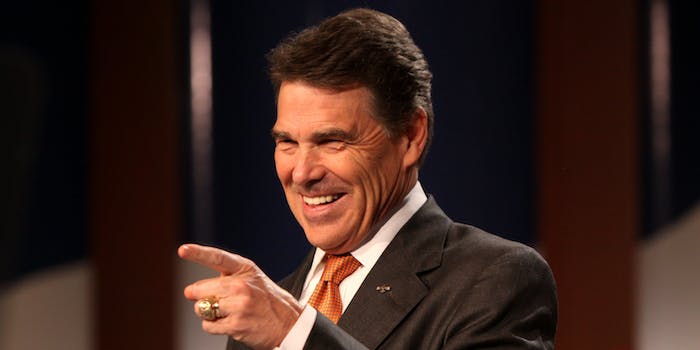 He didn't mention 'climate change' once.

U.S. Energy Secretary Rick Perry said in a conference on Wednesday that shifting underdeveloped nations away from fossil fuels is “immoral.”

“Look those people in the eyes that are starving and tell them you can’t have electricity,” Perry said in a speech to members of the oil and gas industry at the annual CERAWeek energy conference in Houston. “Because as a society we decided fossil fuels were bad. I think that is immoral.”

At #CERAWeek, Rick Perry gave a talk without once mentioning the words "climate change." Shell's CEO took the stage right after and the whole point of his talk is "we have to change" because climate change will be so disruptive

The CEO of Shell, Ben van Beurden, took the stage after Perry.

“No other issue has the potential to disrupt the [energy] industry as much as climate change,” Van Beurden said.

According to ThinkProgress, a Lancet study conducted in 2017 found that globally, “air, water, and soil pollution kill more than 9 million people a year.” Each year in India, over 1 million people die prematurely from air pollution, which is primarily created by the burning of fossil fuels.

Aside from health risks of burning fossil fuels, the Department of Energy is also fighting an uphill battle financially by preventing a long-term shift to renewable resources. According to Bloomberg, the industry of fossil fuels “risks losing $33 trillion in revenue over the next 25 years as global warming may drive companies to leave oil, natural gas and coal in the ground.”

Perry also said last year in an interview that increasing fossil fuel use could prevent sexual assault. With the past two secretaries of energy being scientists, Perry has had big shoes to fill. He seems to be having trouble with the science part.