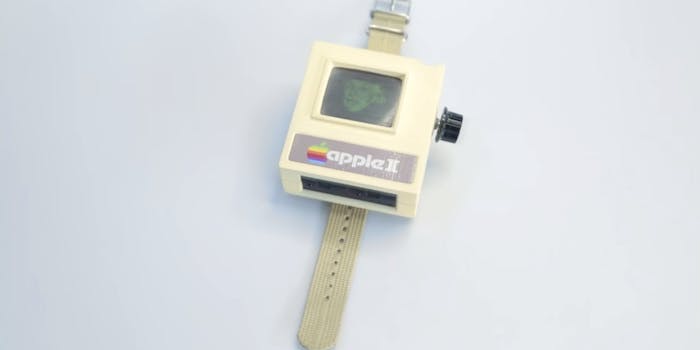 You can 3D print your own Apple Watch

A 3D printer is probably less expensive than the real Apple Watch anyway.

The Apple Watch isn’t even available yet, but in true Apple fashion, an updated version of the smartwatch has been released. Well, sort of.

The Apple II Watch isn’t as sleek as the Apple Watch nor can it perform all the same tasks as the current watch, but that’s totally fine with us. “Aleator777” created the 1970s style as a parody of the “modern Apple Watch.” The device is fully functional and will keep the time and date, but beyond that, it makes a mockery of Apple’s latest gadget.

Put this on your wrist and you’ll be transported to 1977.

The watch even has the capability of changing faces.

Unfortunately, the Apple II Watch isn’t for sale. Bummer. However Aleator777 has written down the instructions to make your own 1977-inspired watch. You’ll just need a 3D printer and some knowledge of how circuits work.