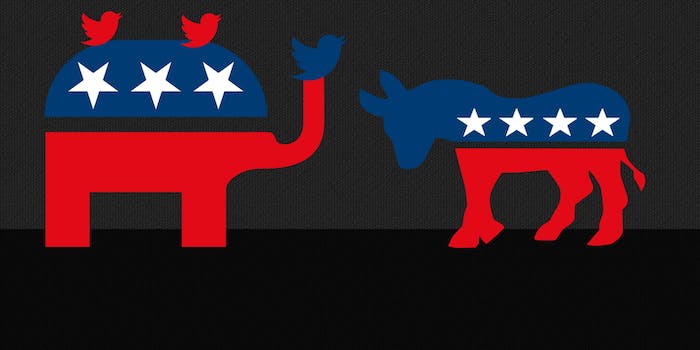 During President Obama’s election campaign in 2008, the lanky Senator from Illinois used Facebook, Twitter, and social media with unparalleled savvy. He was the Facebook politician. The Obama campaign’s sustained digital outreach blitz was crucial to the election’s outcome, and established liberals as the in-the-know political group when it came to online politicking.

The win made it clear that politicians could not ignore what was happening online; their constituents both wanted and expected a new level of interaction and engagement.

Obama’s campaign was admired as ahead of the curve, but his party might be slipping. Red-state Congressional tweeters are catching up to their more liberal counterparts’ social media prowess. According to the Washington Post, Republicans are using Twitter more frequently and more effectively than Democrats in Congress. Republicans in the House of Representatives have 13 percent more followers on average than Democrats in the House, and the gap in the Senate is even larger: Senate Republicans have a nearly 18 percent lead.

Many popular accounts have a substantial percentage of fake followers, and politicians have been known to buy followers to inflate their perceived popularity in the past. Checking some of the most popular Twitter accounts on both sides of the aisle, both sides seem equally beset by bots. Senator John McCain (R-Ariz.), who has the most followers on the Hill, has a hefty percentage of fake followers (23 percent). But Sen. Cory Booker (D-N.J.), the man with the next highest number of Twitter followers, has a similar percentage of fakes (27 percent). Looking at other members of Congress with high follower counts, there’s no sign that one party is especially fond of hiring shills and bots than the other. This lead is genuine.

Seven out of 10 of the most-followed accounts for members of Congress belong to Republicans, as well. This is partially explained by Democratic control of the White House; if President Obama had lost his re-election campaign, he would likely still be in the top 10, as would Vice President Biden. Including the President and Vice President into the mix would make the number of super-popular tweeters more even.

Democrats are often considered the more technologically adept party, largely thanks to the Obama campaign’s maneuverings, but Republicans are serious about closing the technology gap. In February, the Republican National Committee announced the creation of an innovation unit called Para Bellum Labs in an effort to build products and use networks like Facebook and Twitter to bolster their party.