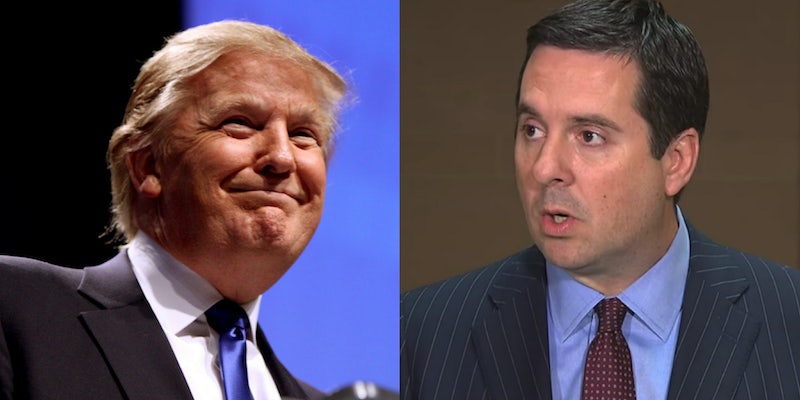 Photo via Gage Skidmore/Flickr Screencab via CNN/YouTube (Fair Use)

The White House was reportedly involved in the dissemination of documents to Rep. Devin Nunes.

The revelation, based on conversations with multiple unnamed sources, adds yet another twist to the unfolding saga over Nunes’ apparent efforts to help the Trump administration amid ongoing investigations into Russia’s attempts to meddle in the 2016 election and potential Trump ties to Moscow, and President Donald Trump‘s unsubstantiated assertion that former President Barack Obama “wiretapped” Trump Tower in October.

The two White House staffers named by the Times source are the senior director of intelligence for the National Security Council, Ezra Cohen-Watnick, and attorney Michael Ellis, a former House Intelligence Committee staffer who now works on national security issues for the White House Counsel’s Office.

Nunes reportedly viewed the documents on the White House grounds on the night of March 21. The following day he briefed Trump and House Speaker Paul Ryan (R-Wisc.) on the intelligence and held a press conference to reveal the information but had not informed fellow committee members, sparking a firestorm of controversy over his relationship with the Trump administration and his ability to conduct an investigation that involves the White House.

According to Times reporter Maggie Haberman, who contributed reporting to the Times report, Ellis is the person who showed the documents to Nunes on the White House grounds.

Ellis was person who showed NUNES the information. Ezra had come upon it in another context. https://t.co/LpT2RL04Sk

Cohen-Watnik, meanwhile, is a holdover staffer brought in by former National Security Adviser Michael Flynn, whom Trump forced to resign after reports revealed that he had misled Vice President Mike Pence regarding conversations with Russian Ambassador Sergey Kislyak.

The White House on Thursday said it would share the documents Nunes obtained with the leaders of the House and Senate Intelligence Committees.

“Our view was that the smart move was to make all the materials available to the chairman and the ranking member of the relevant committees,” said Sean Spicer, Trump’s press secretary, during Thursday’s White House briefing. “We are focused on the substance of it and I think the goal is to make sure people have the substance that are looking into this.”