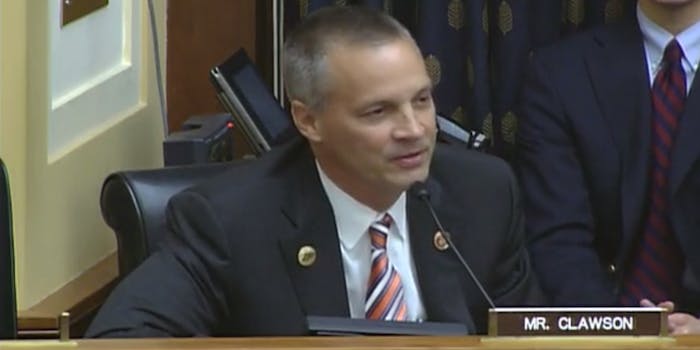 Everybody makes mistakes—just not this mistake.

Florida Congressman Curtis Clawson is probably not having a great day. The Republican from the Sunshine State’s 19th congressional district mistakenly assumed that a group of U.S. government employees were Indian government officials on a diplomatic visit to Washington.

“I am familiar with your country, I love your country, and I understand the complications of so many languages and so many cultures and so many histories all rolled up in one,” Clawson said to Nisha Biswal and Arun Kumar, officials from the State and Commerce departments, respectively.

Clawson’s flub was made during a hearing of the House Foreign Affairs Committee’s Subcommittee on Asia and the Pacific on Thursday. Foreign Policy published video of the cringe-worthy exchange, which ends with Biswal telling Clawson, “I think your question is to the Indian government.”

When it was his turn to talk, Ranking Member Eliot Engel (D-N.Y.) quickly drove home the point that Biswal and Kumar worked for the U.S. government, telling them, “Thank you both for your service to our country, it’s very much appreciated.”

Imagining Rep. Curt Clawson questioning Jack Lew: “I have been to your Western Wall. It is a very big wall.” http://t.co/J030bCLsP8

I’m not saying it’s your fault Curt Clawson misidentified you, but you really should have been white and this wouldn’t have happened

And here’s the kicker:

Rep. Curtis Clawson has an MBA from Harvard.