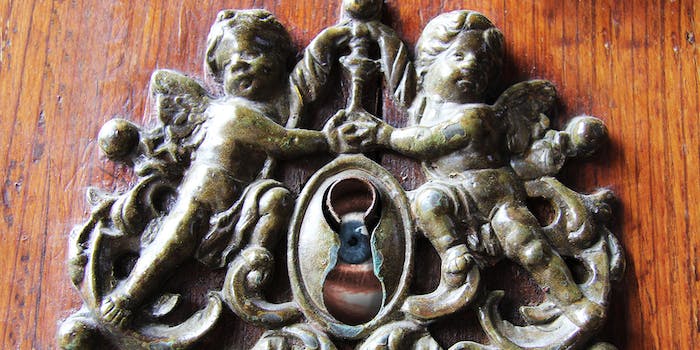 Meet the religious leaders ready to take on the NSA

The National Security Agency will soon meet an unexpected foe in court.

When Rabbi Arthur Waskow wants to explain why his Philadelphia-based Jewish group is suing the National Security Agency, he employs a technique Rabbis have used for millennia: He tells a story.

Waskow recounts a tale of a king who was furious that the Israelites, fleeing slavery in Egypt, were stopping by his kingdom on their 40-year trek through the desert. So he called upon a shaman to put a curse on the wandering tribe. When the shaman arrived at the Israelites’s camp, God turned his curse into a blessing: “How goodly are your tents, O Jacob!”

Why? Later, Rabbis living during the Roman Empire decided what was so “goodly” about the tents was that they provided a shield of privacy for the Jews huddled inside. The empire, after all, employed an extensive network of spies to root out subversives.

The moral of this story, Waskow says with a chuckle,“is if you want to protect yourself from a king who hopes to heap curses upon you, you’re going to need some privacy.”

Earlier this month, the Shalom Center, the Jewish organization Waskow founded three decades ago to fight for social justice causes, joined other religious groups in a lawsuit that challenges the constitutionality of the NSA’s digital spy programs. Filed by San Francisco-based digital rights group the Electronic Freedom Foundation (EFF), the lawsuit represents a new front in the battle to dismantle the surveillance state. Government eavesdropping, the EFF challenges, is fundamentally incompatible with the First Amendment right to the free exercise of religion.

“These groups are worried that people won’t want to participate in religious church life if they know they’re being watched,” said Cindy Cohen, EFF’s legal director.

Since 2008, the EFF has been engaged in a long-running class action suit against the U.S. government. Called Jewel vs NSA, it alleges the agency’s program for collecting cellphone data from AT&T violates Fourth and Fifth Amendment rights—protections against self-incrimination and unlawful search and seizure. 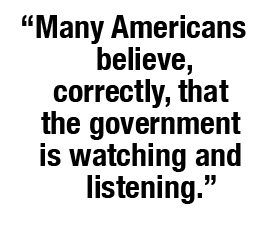 But in July, the group realized there were more fronts on which they could issue constitutional challenges. Former CIA analyst Edward Snowden had just begun leaking a series of documents that exposed an even larger spy program, including the collection of cellphone metadata—the location, time, and duration of calls—and backdoor access to user data held by the biggest U.S. Internet companies.

Snowden’s revelations have convinced some religious groups the government is monitoring their activity closely. Such actions might influence people’s decisions about joining certain organizations and violates the First Amendment, the EFF says.

“Who you communicate with is who you associate with—from your political associations to your religious associations,” Cohen said.

The EFF started looking for a wide range of plaintiffs to join the suit, from conservative gun rights groups to liberal activist groups like People For the American Way. But the organizations that most instinctively grasped what was at stake were the ones sitting squarely in the nexus of the spiritual and the political.

For Rev. Rick Hoyt of the First Unitarian Church of Los Angeles, it’s virtually impossible to draw a line between the church’s religious concerns and its political activism.

Started by suffragette Caroline Severance in the late 1870s, the church has a long history of activism. In the mid-1950s, it fought a Cold War-era California law requiring every nonprofit organization in the state to sign an oath of allegiance to the United States as part of its annual tax return. The church sued the state, claiming the oath violated the First Amendment. The suit eventually made its way up to the U.S. Supreme Court, where the loyalty oath was struck down in a nearly unanimous decision.

After that legal battle, the church earned a reputation as being a haven for socialists and blacklisted entertainers.

“FBI agents would regularly show up at the church,” Hoyt said.

“So the idea that a religious organization could be involved in controversial political topics and be placed under surveillance is something very real to us.”

Hoyt said the decision to stand up to the NSA has been surprisingly popular with his parishioners and almost uniformly uncontroversial among First Unitarian’s largely progressive congregation.

“The Unitarian faith is based on our ability to make change in the word right now,” Hoyt continued. “The way we do that is by combining our voices into organizations thereby amplifying our power to make social change. If you inhibit our ability to associate, you inhibit the very way we express our faith.”

Anxiety about government surveillance has been widespread among American Muslims in the dozen years since the attacks of Sept. 11, according to Gadeir Abbas, a staff attorney for the Council on American-Islamic Relations (CAIR).

“The Muslim community has been subjected to a vast network of informants maintained by the FBI, a policy that’s been justified by a fear of Muslims in general,” said Abbas, whose organization has also joined the lawsuit.

“The saddest thing I came across was learning of a Muslim mother warning her children to be careful before they leave for the local Mosque. … Many Americans believe, correctly, that the government is watching and listening.”

CAIR is a Washington D.C.-based organization involved in a wide range of activities from lobbying on Capitol Hill to advocating for American Muslims who feel they have been victims of hate crimes. CAIR has already seen some of its efforts stymied by the omnipresent fear of being watched experienced by many in the Muslim community, according to Abbas.

“Some of the people I deal with through CAIR don’t want to talk about certain things over the phone because they’re afraid they’re being monitored,” he said.

Abbas pointed to the case of Yasir Afifi—a California college student who discovered a magnetic FBI tracking device stuck to the bottom of his car—as a reason why some American Muslims may be suspicious of government interference. But that case shouldn’t be the only cause for suspicion, he said.

“We know our actions are being monitored because if you’re a customer of any cellphone company in the United States, there’s a standing order to collect all of that data.” 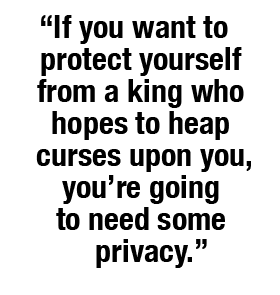 Agency defenders, such as NSA mathematician David Gewirtz, claim that casting a wide net when it comes to gobbling up data is an essential part of protecting Americans from terrorist attacks. In a recent editorial published by ZDNet, he insisted that a system of internal checks keeps innocent people safe from having their privacy violated.

“[The] NSA produces foreign intelligence for the benefit and defense of our nation,” Gerwitz wrote. “Analysts are not free to wander through all of NSA’s collected data willy-nilly, snooping into any communication they please. Rather, analysts’ activity is carefully monitored, recorded, and reviewed to ensure that every use of data serves a legitimate foreign intelligence purpose.

“We’re not watching you,” he added. “We’re the ones being watched.”

However, the plaintiffs in the suit, which is expected to first go before the U.S. District Court for Northern California later this fall, argue that even the threat of being surveilled is enough to violate their constitutional rights.

“The Establishment Clause of the Constitution, as it was originally conceived, was seen as protecting religion from the state—not just protecting the state from religion,” Abbas said.

“To give religions the space they need to flourish, the government can’t be in everyone’s personal space and there’s almost nothing more personal than someone’s religion.”

The NSA did not did respond to request for comment on this article.