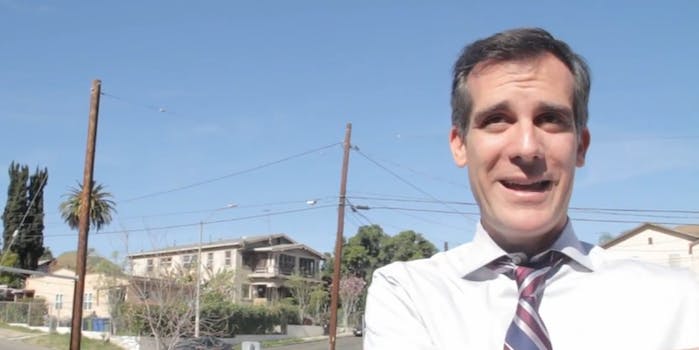 9 things (other than waffles) redditors want from the mayor of L.A.

Public transit upgrades, help for the homeless, and ... hey, where are those free waffles we were promised?

With such a sprawling mass of neighborhoods, communities and, of course, traffic, Los Angeles has many disparate problems to address and only one mayor to oversee them,

To hear from citizens and find out what they want to change about the city, mayor-elect Eric Garcetti took to Reddit to get the community’s ideas for a better city.

Garcetti is somewhat familiar with Reddit, having dropped by for an AMA (Ask Me Anything) session druring the mayoral race. This time, he wanted answers, rather than questions, from the 28,000 members of the Los Angeles subreddit.

Reddit is, after all, a microcosm of democracy. Popular ideas bubble to the top, and it’s a decent way for Garcetti to informally gauge opinion on a number of matters, albeit from a somewhat niche audience.

Here’s some of the more interesting ideas, and what Garcetti had to say about them.

The suggestion not only afforded redditors the chance to complain about their crappy connections, but let Garcetti break down the key roadblock to the high-speed Internet proposition.

“This is critically important,” he wrote. “Google probably won’t tackle a city as big and spread out as LA initially, but we want to explore with them and other partners what we can do to upgrade our fiber infrastructure. … [T]ech is a cornerstone of my plans to jumpstart our local economy and having the best fiber infrastructure in the country is critical to attracting and retaining tech companies and communities here.”

2) If there is anyway to expand Metro Rail hours please do so. (ilikesumstuff6x)

Though one redditor pointed out it might not be workable to have trains run late into the night, since time is needed to maintain tracks, Garcetti mentioned the local economy benefitted from having trains run later.

“Trains run to 2am on weekends now. But I hear you about other nights and maybe going later on the weekends. This started with the Red Line during the holidays and it was great for business and we need to keep doing this.”

3) Support the Cannabis Co-ops and lets stop wasting tax dollars on arresting, jailing people, and ruining lives for something that will be completely legal very soon. (ZappyKins)

Reddit being Reddit, there will always be those hoping for more leniency on marijuana legislation and looser enforcement of existing laws. Garcetti argued he voted to agree with court rulings in a way to “get on the ballot something that would preserve access and help us also get out the bad actors.”

He believes the government needs to reclassify cannabis, and noted that if the California electorate wanted recreational use legalized, he’d be on board.

4) What are your thoughts on the ridiculous amount of, as Adam Carolla calls them, “Chicken Shit tickets,” being handed out on a daily basis by the LAPD? (thewildfish)

Again, Garcetti offered a reasonable response, claiming tickets should be used for parking management and enforcement, not as a source of revenue for the city. He also suggested including a discount on tickets for those who pay swiftly, meaning more money in the pockets of both residents and the city (from fewer unpaid tickets).

5) Will the metro rail ever connect to the airport? (elin32)

Let’s face it, taking an expensive cab or coach to the airport isn’t fun. Mass transit would be the ideal option for many commuters, with a metro or subway link meaning in-a-hurry travellers can skip traffic as well. That might not be workable in L.A., but Garcetti agreed there needs to be a solution.

“Very tough to get transit to the terminals, so probably a people-mover from a close-by line, but we have to get transit into LAX. This is very important…”

6) As the new mayor, what steps are you taking to ensure that the 51,000 homeless in Los Angeles – who are now ready and prepared for work – will stop living in poverty and begin leading self-sufficient lives? (chipotlesoulmate)

The mayor-to-be noted his campaign included the idea the city could end “chronic homelessness.” He has a plan in place:

We know that permanent supportive housing, a strategy that puts housing and critically-needed services together so that someone has a place to live AND the childcare, job training, substance abuse or mental health counseling that they need to stay off the street. In my district, we also took a second step that I’d like to take citywide. In Hollywood, we have had great success with Hollywood 4WRD, where we didn’t just count the number of homeless people in the neighborhood (as required by law through a homeless census), but we interviewed them individually, got to know their names, their history, and their stories and then we worked to get them off the street one at a time, building hundreds of units of permanent supportive housing and helping case manage the needs of these formerly-homeless people. We have taken 185 people off the street and 180 are still there today, an incredible rate of success. So we know how to do this, it is time to get the job done. Oh yeah—the other good reason to do this is it saves money. Keeping people on the street is very very expensive when they cost everyone hundreds of thousands of dollars in emergency room visits, for instance. This is the right thing to do morally and financially.

7) On the campaign trail, you made clear that, as mayor, you would bring more clean jobs and clean air to LA by setting a strong goal for the city to install rooftop solar power. Please set those wheels in motion as soon as possible. (sbirdy)

Garcetti hopes to make L.A. “the solar capital of the US,” creating 20,000 green jobs to mainly install solar panels and clean up water. He has a plan and is ready to implement it, he said.

One redditor remembered a joking pledge Will Ferrell made when endorsing Garcetti, suggesting that residents would get free waffles should he be elected. That’s impossible to pull off, but Garcetti offered a compromise: “No joke–the owner of Roscoe’s, Herb, said if I really wanted to make it happen one day, we could do it for an hour…”

There were other suggestions Garcetti didn’t respond to. Redditors also want:

10) Not to spend money on a “stupid football stadium.” (wil)

That would be a comment from actor/writer/Internet hero Wil Wheaton, who is far more likely to be seen watching an L.A. Kings hockey game in a horse mask than at an NFL game.