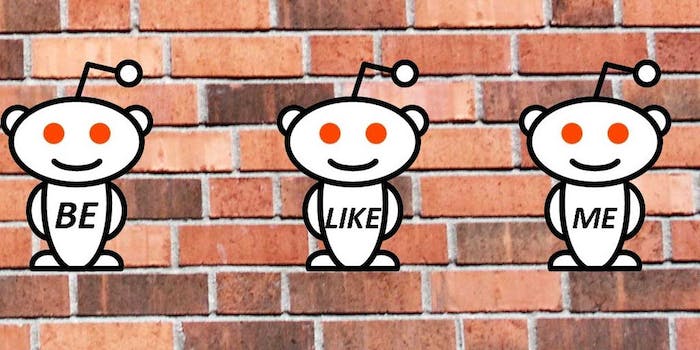 The site’s lengthy spam rules generally discourage the submission of content from sites other than those with very recognizable URLs. In the self-promotion section of Reddit’s official FAQ, it goes as far as to state, “If you run a subreddit that is only your own content or your own links, that’s not okay and seen as linkfarming or using reddit for SEO. Even in your own subreddit, just submitting links to your own site/stuff can get you banned.”

The section goes on: “We’re not making a judgement [sic] on your quality, just your behavior on reddit. Your stuff’s probably amazing and someone would be really interested in it but… If you submit mostly your own links and your presence on reddit is mostly for your self-promotion of your brand, page, blog, app, or business, you are more likely to be a spammer than you think!”

While such restrictions may effectively limit dedicated spammers, some redditors feel that it can be detrimental to the appearance of original content on the site.

“In my time on reddit I’ve come across numerous shadowbanned accounts belonging to bloggers who have been banned under Reddit’s spam rules,” redditor cojoco said in a July 31 post on r/TheoryOfReddit that discussed the matter. “While many of these blogs are not of high quality, there are some very well-regarded journalists who have been banned under these rules. While I’m not sure if there is a better alternative than the current system, I’m very sure that the spam rules as they’re currently enforced have been driving content originators off Reddit.”

“Reddit is great for its candid commentary, but its penchant for low-hanging fruit seems like a huge hurdle to individual success,” redditor wrexsol said in agreement. “Maybe OC wasn’t what reddit was designed for in the long run, even though that thought could be attributable my individual biases. But I’m wondering just how common it is for some OC creator with a so-called legit claim to fame to actually make it here.”

“Reddit was designed as a link aggregator so the gold standard here is a quality link,” gentlebot argued. “Although in practice it hasn’t quite worked like this, the idea is to filter the very best from the vastness of the web, not add to the vastness by posting something you wrote.

And considering many blog posts can probably be reorganized into the format of a self post, there is no reason to post uninhibited blogspam other than for personal and/or monetary promotion.”

“Part of being a high-quality content originator means being active with both posts and comments and engagement outside of things that you yourself post,” spkr4thedead51 said. “Anyone who is truly high-quality is going to do that, and the few shadowbans that target such people are unfortunate, but not so significant that they are going to drive away other participants.”

Both sides seemed to agree that a site-wide shadowban was indeed too serious of a punishment for violation—especially unintentional—of Reddit’s spam policies.

“[A shadowban] is really way too harsh, especially since they will have no idea they did anything wrong, no feedback at all no nothing,” leva549 stated.

Bottom line: When submitting, stick with Imgur-hosted memes and you should be fine. Reddit is turning into an imageboard anyway.