Yes, Reddit’s OK with you branding an AR-15 with its logo

Just be sure to ask permission first.

After months of speculation, it’s now clear that social news site Reddit has allowed the site’s gun enthusiasts to brand their weapons with the company’s logo.

One such redditor provided a confirmation email from Jena Donlin, Reddit’s business development manager, to Mother Jones. The letter states that redditors have “permission to engrave the reddit alien on the frame of the AR-15 given that it is group not-for-profit buy.”

Donlin was responding to a request from redditor r1b4z01d, who messaged her in May 2011 about the branding.

“The AR-15 is a very common firearm (it is arguably the most popular gun in America) so while unusual, it’s not surprising that the gun community on Reddit would want to create a custom accessory,” Victoria Taylor, Reddit’s communications manager, told Mother Jones.

Reddit’s r/gunsforsale made national headlines in February when a user named  x—x–x-x posted a photo of an AR-15 engraved with “Snoo,” Reddit’s mascot. At the time, it wasn’t clear whether Reddit had officially permitted the engraving. 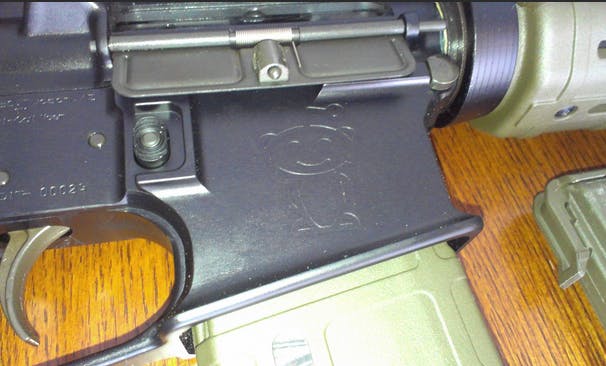 The incident sparked a debate about gun control on the site and beyond. Only two months earlier, 20 school children and six adults were gunned down inside Newtown, Conn.’s Sandy Hook Elementary School by Adam Lanza. He did so with a Bushmaster .223 caliber model XM15-E2S rifle with high-capacity 30-round magazine, according to Connecticut’s Department of Emergency Services and Public Protection. The gun was legally owned by Lanza’s mother.

R/gunsforsale is a vibrant community with 7,265 subscribers who price, sell, and buy guns. The subreddit instructs redditors to “be aware of all state and federal laws that apply to you and any parties involved in a firearms-related transaction.”

“You are responsible for knowing and following the law,” it states. “This subreddit and its staff are in no way responsible for informing you of the law, but will make every effort to do so.”

Mother Jones’s story hasn’t gone over well with members of Reddit’s gun communities, who see it as fomenting false outrage for the sake of pageviews. Nick Leghorn, who writes for TheTruthAboutGuns, bust summed up that argument: “Reddit’s gun sales sections are no different than any other website that lists firearms for sale on the net, but because Reddit is one of the most popular websites, the suggestion that a beloved site could be the source of ‘gun trafficking’ might ruffle some feathers.”

Below are the messages Donlin sent to r1b4z01d.