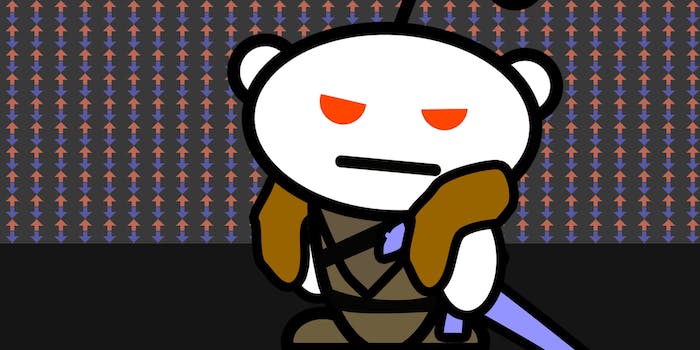 Meet the Reddit power user who helped bring down r/technology

No one man should have all that power.

Maxwellhill, one of Reddit’s first and most important users, has now become the site’s own worst enemy.

One of the first moderators of default subreddits r/politics, r/technology, and r/worldnews, maxwellhill joined Reddit eight years ago, and immediately made sure each forum featured links to hundreds of news stories a month. This was crucial for Reddit, whose cofounders Alexis Ohanian and Steve Huffman were eager to have people contribute to their link-sharing website. With top posts in each of these three subreddits appearing on Reddit’s front page—and as the first subreddits each new Reddit user was subscribed to when they signed up—it was important for the site to look busy.

“I focused on building a reputation for quality links with a style of my own: I avoided pics, jokes, and comics if at all possible; I focused on well-written articles from reputable sources,” maxwellhill wrote on Gizmodo a few years back. “I would change the title to reflect the gist of the article, but I would never editorialize it. (Otherwise I would appear biased, and could alienate a general audience.) Sometimes I had to make the title interesting, but I would never distort the story or be misleading. I would not comment on my own submissions either; I stayed strictly a content provider, sticking to the ‘platform’ approach I had identified early on.”

Posting new links was such an important task, Huffman and Ohanian created “tons” of fake users they’d use to submit links.

By 2011, maxwellhill’s diligence paid off. He was proclaimed one of the most viral people of 2011 by Gizmodo and was the first redditor to collect more than 1 million karma points through Reddit’s gamified voting system, which rewards users for providing the community with popular content and which is completely useless in the real world.

Maxwellhill was an Internet god.

Today, he is perhaps the most reviled person on Reddit and emblematic of an antiquated moderator system that seems to be cracking under the weight of the sites’ exponential growth.

In the past nine months, r/politics and r/technology have been booted from Reddit’s list of default subreddits for a laundry list of issues that include controversial domain banning and, most notably, moderator drama.

At the center of each kerfuffle is maxwehilll who, like a British monarch, has gotten fat off years of inaction, behind the scenes shenanigans, and ignoring his communities.

The most recent victim of maxwellhill’s antics was r/technology.

For years, about half of r/technology’s moderators have been completely absent, forcing five redditors to manage a community of more than 4.5 million users. Moderator responsibilities include banning users for breaking Reddit’s rules, removing spam posts, and recruiting new moderators.

Two of these inactive moderators included Ohanian, who removed himself as a moderator before admitting that he hadn’t been an “active mod on *any* subreddits in years,” and maxwellhill.

While news of this banned terms list began to circulate around Reddit, maxwellhill continued doing what he did best: submitting links. Only he did it a little differently this time around. Thanks to his senior moderator status within r/technology, maxwellhill was able to submit a link with two of the banned terms and push it past the bot. Subscribers revolted.

Obviously aware of the cries of “censorship” from the r/technology community, maxwellhill began approving and removing moderators at a rapid pace, in an apparent effort to calm the brewing storm and strip other mods of their permissions. One of the redditors maxwellhill added Thursday was anutensil, a controversial r/worldnews moderator and former r/politics mod who has been described as “poisonous rot that makes any team operate in a negative environment.”

“Maxwellhill and anutensil are on one end of the moderation philosophy spectrum and theredditpope are on the opposite end,” Pharnaces_II, a new moderator of r/technology, told the Daily Dot. “This resulted in internal turmoil as both sides attempted to implement their policies or maintain the status quo in their favor.”

Having seen similar drama on r/politics last summer under the tutelage of the same two moderators, maxwellhill and anutensil, r/technology was removed from Reddit’s default list.

R/technology moderator Doctor_McKay quit following the news. Neither he nor davidreiss666, who actually resigned from his moderator position before r/technology was removed, went quietly.

“Today, maxwellhill turned the entire subreddit into a total shit-storm,” davidreiss666  commented on Thursday. “Don’t worry about me. I am a big boy. I can take a little disagreement with people. But in this case, there wasn’t even disagreement. They refused to talk about anything. At all. No discussion of any kind took place. Just maxwellhill in his quest to get r/technology punished by the admins. He got it. Right across the face. He didn’t even see it coming, that I am sure of.”

To date, maxwellhill has never publicly broken his silence regarding the r/technology or r/politics drama. His last Reddit comment was made on Dec. 26. It’s been about a week since he posted his last link, a strange sign for someone who has posted at least six times a day for years.

In December Reddit administrators quietly introduced a new rule prohibiting redditors from moderating more than three default subreddits. Administrators did not provide an official explanation for it.

Maxwellhill and anutensil are still r/technology moderators. Pharnaces_II was added as a mod Thursday and has began fixing its issues.

“Right now we’re working on stabilizing our mod team and regaining the trust of our community,” Pharnaces_II  said. “We are making changes to how moderation, especially with AutoModerator, is done in a way that I don’t think any other major subreddits have done to the same extent. By making our AutoMod configuration public we are giving the subscribers the ability to check our power and keep us honest.”

The Daily Dot reached out to maxwellhill for comment, but he has not responded.

“I have had the displeasure of being witness to the senseless damage caused by a moderation team led by individuals who struggle with teamwork and honest communication,” theredditpope told the Daily Dot. He added:

The power plays and dysfunction of the top mods in r/technology recently and in the past serves as a bad example for all moderators. Technology, WorldNews, and other subreddits where these people are also top mod have suffered tremendously. Mods should be stewards of their communities, but the actions committed by the top Technology [mods] shows what many users have been saying for years—that they are only interested in themselves.

While Reddit’s moderator rule forced the likes of maxwellhill to relinquish a handful of moderator positions, it hasn’t done enough to stem the tide of abuse. The changes taking place at r/technology show that it’s possible for the existing moderator system to evolve. But what’s more clear is a fundamental flaw to the system best described by an egomaniac in his own right, rapper Kanye West: No one man should have all that power.

Former r/technology moderator davidreiss666 clarified in a discussion about this article that he was the person who initially modded anutensil more than two-and-a-half years ago. After she removed r/technology moderators AgentLame and TheSkyNet, he in turn removed her. Anutensil was ultimately brought back on as a moderator by maxwellhill shortly afterward.

“There was no communication from Anu before she removed mods, after she removed them, or after her removal,” he wrote. “She seems to believe she doesn’t have to talk to her fellow mods at all.”

It’s worth noting that this is the exact type of musical chair behavior that Reddit admins cited when dropping r/technology from its default status.