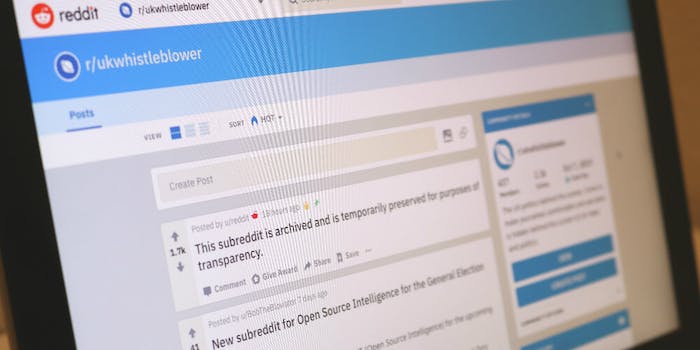 Reddit banned one subreddit and 61 accounts linked to the campaign.

Reddit has banned one subreddit and 61 accounts linked to an alleged Russian campaign.

“With indicators from law enforcement,” Reddit was made aware of one specific post that included the leaked documents. It investigated the account and others connected to it, coming to the conclusion that it is “part of a campaign that has been reported as originating from Russia.”

In November, Labour Party leader Jeremy Corbyn presented the documents, which are from the U.K. Department for International Trade and outline future trade deal negotiations between the U.S. and U.K.

Corbyn said at a press conference that the documents were “evidence that, under Boris Johnson, the NHS is on the table and will be up for sale.”

The documents were posted to Reddit by u/gregoratior in October, a month prior to Corbyn going public them. It is unknown how the Labour Party attained the documents, according to the Guardian.

“All of these accounts have the same shared pattern as the original Secondary Infektion group detected, causing us to believe that this was indeed tied to the original group,” the Reddit post reads.

“Secondary Infektion” is an alleged Russian-based information operation that was caught in May planting false stories online and then bolstering them on Facebook.

“The operation’s goal appears to have been to divide, discredit, and distract Western countries. Some of its stories were calculated to inflame tensions between NATO allies, especially Germany and the United States, as well as Britain and the United States,” DFRLab, the team who discovered Secondary Infektion, wrote in a June Medium post.

The banned subreddit, r/ukwhistleblower, has 437 members.

Reddit posted the names of accounts and the name of the subreddit banned, citing its “policies against vote manipulation and misuse of the platform.” It is also preserving them momentarily so that “researchers and the public can scrutinize them to see for themselves how these accounts operated.”