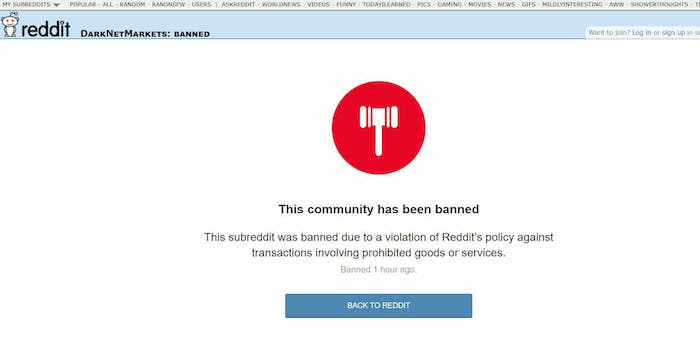 The site added a list of prohibited items to its policies.

Reddit banned some of its most popular subreddits after adding a policy that prevents users from soliciting or facilitating the sale or gifting of “prohibited goods.”

The company announced the rule on its r/announcements page on Wednesday. While the social network is best known for discussions on controversial topics, memes, and online protests, it has also become a destination for those looking to purchase or win goods from other members and communities. Starting today, users will no longer be allowed to use Reddit as the middleman for obtaining prohibited items.

Reddit didn’t give its community any warning before enforcing the rules. It swiftly banned r/darknetmarkets, a controversial forum for discussing dark net vendors that sell drugs, stolen data, and counterfeit goods, among other illegal items. A 2015 Wired article called the forum one of the site’s “central fixtures of the online drug scene.”

It caused problems when a Baltimore Department of Homeland Security (DHS) Immigration and Customs Enforcement officer sent a subpoena to Reddit in 2015 asking them to turn over data on five of the subreddit’s members. The “darknetmarkets” subreddit had more than 150,000 members at the time it was banned.

Reddit also banned the massively popular r/beertrade subreddit, the internet’s most popular and active platform for beer fans to trade their favorite craft drinks. A cached version of the homepage from January showed it had more than 20,000 subscribers.

The moderator account explained in the comments that the policy entry wasn’t spurred on by any lawbreakers, but rather because the site wasn’t built to ensure transactions are happening legally.

“The update does encompass these subs,” the Reddit-Policy account wrote. “We considered this a lot, and this change is not due to any bad actions by these particular communities. However, due to the controlled nature of alcohol, Reddit is not built to ensure that the sales are happening legally, and so we can no longer continue to host communities solely dedicated to trading of alcohol or other controlled substances. However, communities dedicated to discussion of craft beer remain fully within the rules.”

Forums that encourage the discussion of craft beer will remain—only those being used as a marketplace will disappear from the site.

Interestingly, when it comes to sexual content, the new rules only impact paid services involving physical sexual contact, which suggests using Reddit as a means to obtain sexually explicit photos or videos is still allowed.

Reddit went on a similar banning spree in October after updating its policies on violence. The site cracked down on nazi-sympathizing hate groups and animal abuse communities like r/NationalSocialism, r/Nazi, r/whitesarecriminals, and r/SexWithDogs.

You can read the full rules on gifts, giveaways, and trades here.