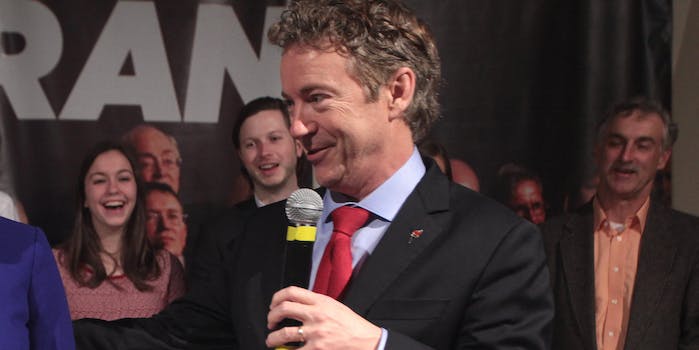 Denied a chance to out alleged whistleblower, Rand Paul turns to Twitter

The name has been floated around conservative circles, with both the president and his son tweeting it.

At President Donald Trump’s impeachment trial in the Senate, Sen. Rand Paul (R-Ky.) tried to submit a question for the Democrats’ impeachment managers, which was turned down by Supreme Court Chief Justice John Roberts, who is presiding over the trial.

The reason it was excluded was that it included the name of what is considered to be the purported whistleblower, whose report on Trump’s call with Ukraine kicked off the impeachment inquiry. So, instead, Paul on Thursday tweeted the name.

That name has been floated around conservative circles for some time, with both the president and his son tweeting it.

Paul likewise tweeted that his question was material because it pointed to links between a national security official and a House staffer.

My question today is about whether or not individuals who were holdovers from the Obama National Security Council and Democrat partisans conspired with Schiff staffers to plot impeaching the President before there were formal House impeachment proceedings.

In a subsequent tweet, Paul denied he was attempting to out the whistleblower: “My question is not about a ‘whistleblower’ as I have no independent information on his identity. My question is about the actions of known Obama partisans within the NSC and House staff and how they are reported to have conspired before impeachment proceedings had even begun.”

Paul also held a press conference alongside his tweets, where he named the whistleblower there as well.

The move sparked outrage and even a hashtag #ArrestRandPaul.

Rand Paul should be arrested and prosecuted today. He illegally left the Senate Chamber to give a press briefing where he committed the crime of naming a whistleblower thus purposely putting their lives in danger. He’s much more than evil.

This is OUTRAGEOUS!!! To put someone’s LIFE in danger like this is beyond any measure of evil!! #ArrestRandPaul https://t.co/eCk8g661Zx

While whistleblowers are protected from being outed by the agency they work for, the protections don’t extend past that, so Paul isn’t in any sort of violation.