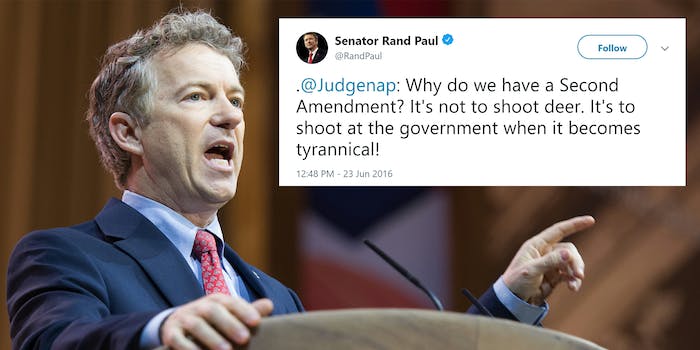 Sen. Rand Paul (R-Ky.) spoke out about the current political climate in the wake of the tumultuous and highly partisan Brett Kavanaugh confirmation process on Tuesday, according to Time. But his calls for reason have been attacked on social media because of an old tweet of his.

Speaking to a Kentucky radio station, Paul said he really thought someone was going to wind up assassinated.

“I fear that there’s going to be an assassination,” Paul told WHAS. “I really worry that somebody is going to be killed and that those who are ratcheting up the conversation, they have to realize they bear some responsibility if this elevates to violence.”

Paul’s opinion on this carries some weight, as he was on the receiving end of two separate attacks in the past two years. In one, he suffered broken ribs after his neighbor assaulted him, and Paul was on the field in 2017 when a gunman opened fire on Republicans practicing for the annual Congressional softball game, where Rep. Steve Scalise was repeatedly shot.

Paul specifically went after Democratic calls to harangue Republicans in public, saying it could lead to a dangerous escalation: “When people like Cory Booker say get up in their face … What he doesn’t realize is that for every 1,000 persons who want to get up in your face, one of them is going to be unstable enough to commit violence.”

Yet Paul’s claims that the government shouldn’t be violently protested and/or overthrown is belied by his very ardent online stance that the right to bear arms in America exists to… violently overthrow the government.

“Why do we have a Second Amendment? It’s not to shoot deer. It’s to shoot at the government when it comes tyrannical!” he tweeted in June 2016.

.@Judgenap: Why do we have a Second Amendment? It's not to shoot deer. It's to shoot at the government when it becomes tyrannical!

It’s not the first time the tweet has resurfaced. After the Scalise shooting, Paul’s office told the Daily Dot that it was written by a staffer and not Paul.

However, the tweet remains live. Lamenting violence from the opposition when your expressed stance is that the government can and should be overthrown when it becomes illegitimate is hypocritical—and Twitter is letting Paul know it.

This one sure aged well. Now Senator Snowflake is clutching pearls and worried someone might get killed due to the "political climate." Just another who prefers sniping from the sidelines and trading in anger over actual governing. https://t.co/PX3cIbLpHz

Guys, kneeling is disrespectful to the military and first-responders. Also, don't forget to hoard weapons in case you feel like shooting them all. https://t.co/iPPu1buvyb

It’s been standard right-wing rhetoric that Democrats are now an out-of-control mob hellbent on destroying American institutions, which they believe have been co-opted by an illegitimate president and party run amok. It’s the kind of thing Paul advocated people rising up against.