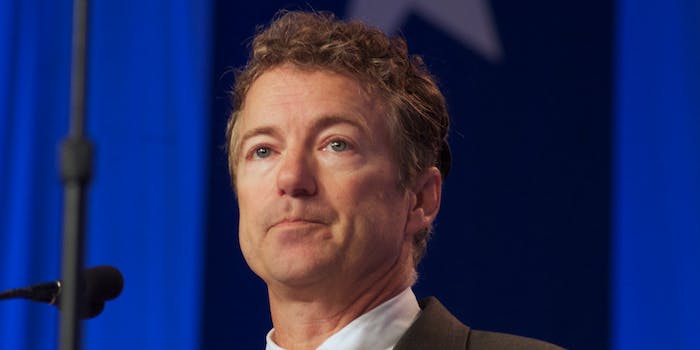 Jon Stewart, and the internet, have criticized Paul's decision.

Sen. Rand Paul (R-Ky.) is facing a torrent of criticism after he delayed a vote in the Senate to reauthorize the 9/11 Victims Compensation Fund on Wednesday.

Paul, according to the Washington Post, stalled an attempt by Sen. Kirsten Gillibrand’s (D-N.Y.) to have the bill approved by unanimous consent, believing that the costs associated with it should be offset elsewhere. A spokesperson for the senator told the news outlet that he wanted to add a provision to the bill to help pay for it.

Comedian Jon Stewart, an advocate for the fund, ripped Paul’s decision during an interview with Fox News on Wednesday.

“It’s absolutely outrageous, and you’ll pardon me if I’m not impressed in any way by Rand Paul’s fiscal responsibility virtue signaling,” he said, later adding: “Now he stands up at the last minute, after 15 years of blood sweat and tears from the 9/11 community to say that it’s all over now. Now we’re going to balance the budget on the backs of the 9/11 first responder community… This is about what kind of society we have, at some point we have to stand up for the people who have always stood up for us.”

Last month, Stewart gave emotional testimony during a House Judiciary subcommittee hearing about the fund and blasted members of Congress for not attending the hearing.

Meanwhile, on Twitter, Paul said that he was not “blocking” the bill, but rather “asking for a vote on an amendment to offset the cost.”

Not blocking the 9/11 bill – simply asking for a vote on an amendment to offset the cost.

The explanation was not met well by people online.

So you're blocking the 9/11 First Responders bill until we cut spending to health care or education. Right? Shameful @RandPaul. You were fine with cutting taxes for millionaires, but taking care of these heroes is too much? Despicable. https://t.co/JgZz0oYWLo

Let's get rid of your salary and tax payer benefits because it costs too much. https://t.co/jDNDURnsZW

Now was not the time for that @RandPaul and you know it. https://t.co/FYVrQnEugz

If you cared as much about 9/11 first responders as you did about your wealthy donors and corporations, you'd pass the bill right now.

These are firefighters and police officers fighting for their lives. Do your job. https://t.co/TRhkyLC26E

As of Friday morning, Paul’s tweet had more than 17 thousand replies compared to just 2,400 retweets and 9,400 likes.